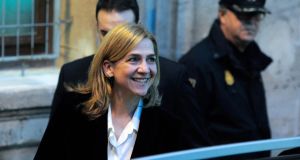 But while the royal family hopes the much-hyped court appearance will mark a positive turning point in a scandal which has severely damaged its image, it is still not clear whether Spanish public opinion will see it the same way.

As the smiling Princess Cristina (48) arrived at the hearing in Palma de Mallorca, more than 300 journalists were watching her, and dozens of demonstrators were chanting anti-royal slogans.

After agonising over whether she should have to walk the 40-metre promenade leading to the court, like almost all other suspects, the police and justice authorities had decided that for security reasons she should be driven to the entrance.

Questions
Inside, King Juan Carlos’s younger daughter faced more than 400 questions from investigating magistrate José Castro about her finances and those of her husband, Iñaki Urdangarin. Mr Urdangarin is accused, along with a former business partner, of siphoning off millions of euro of public funds from the Nóos charity into private bank accounts.

Judge Castro believed that the princess had some knowledge about her husband’s allegedly illegal activities, pointing in particular to her 50 per cent stake in what appears to have been a phantom company he created for tax evasion purposes.

However, according to lawyers who were present inside the court, the princess denied any such knowledge, answering many questions with “I do not know,” or “I am not aware of that.”

While Judge Castro must now decide whether she should face trial, her lawyer Miquel Roca said afterwards that she had “cleared up everything” and “shown, we hope, among public opinion, how innocent the princess is.”

But, given the tone of much of the reaction to Saturday’s questioning, that same public opinion still appears to need persuading.

“She is the culprit – the whole thing would not have gone on without her,” said Manuel Delgado, a lawyer for the Civic Front, which is a civil party in the case. “All we want is that justice be served as it should be for all Spaniards.”