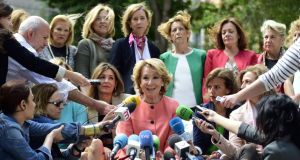 “There have been too many cases of people being corrupted,” says Esperanza Aguirre, the Popular Party (PP) candidate for mayor of Madrid in tomorrow’s local elections. “People are fed up.”

She is speaking in the Madrid headquarters of the conservative PP, which governs the capital, the surrounding region and Spain. The walls of her office and throughout the building are made of glass – a symbol, the party says, of its commitment to transparency.

Tomorrow, that frequently questioned commitment will be under scrutiny across Spain, as elections are held for 13 of the 17 regional parliaments and town and city halls nationwide. It is the first Spanish election campaign for at least two decades in which corruption has dominated the agenda and the results are expected to deliver an unprecedented blow to the country’s two main parties, transforming the political map.

Aguirre (63) symbolises Madrid conservatism like few others. The president of the region between 2003 and 2012, she cuts a controversial figure, consistently enraging the left and upsetting factions of her own party with her outspokenness.

She lives up to her high-society image by revealing to The Irish Times that she will be attending a bullfight with Nobel laureate Mario Vargas Llosa as part of the city’s Saint Isidore celebrations.

But when asked about the seemingly never-ending stream of corruption scandals that have hit her PP and the opposition Socialists in recent years, she is adamant that Spanish democracy is not to blame.

Aguirre’s confidence and charisma ensure she has a fiercely faithful support base. But many Spaniards believe she epitomises the complacency of a political system that abuses their trust.

One example is in Andalusia, where senior members of the Socialist Party have been investigated for allegedly siphoning off €136 million from a public fund created for crisis-ridden companies.

Among the many scandals to have affected the PP recently is the one surrounding Luis Bárcenas, its former treasurer, who claims that the party kept an illegal cash fund financed by corporate bribes for two decades.

Closer to home for Aguirre was the arrest last year of her former second-in-command, Francisco Granados, as part of an investigation into a massive bribes-for-favours network.

The perception of Madrid as a hub of corruption helps explain why the region and its city hall are a key battlefield in Sunday’s elections, particularly for two new political forces, Ciudadanos and Podemos, which both aim to end two decades of PP government there and leave the opposition Socialists out in the cold.

Podemos, which was formed only in early 2014, has moderated the radical anti-austerity platform that earned it 1.2 million votes a year ago in the EU elections. While polls show that its support nationwide has dropped slightly in recent months after briefly leading voter intention earlier this year, it is still in a four-way virtual tie with the PP, the Socialists and Ciudadanos.

“The social majority wants a change, a real change and we’re in a tremendously tightly fought political battle,” says Miguel Vila, a Podemos candidate for Madrid’s regional parliament. A 30-year-old with a background in leftist grassroots movements, he is typical of the party’s membership and his straggly long hair and T-shirt reflect its informal style.

Pablo Iglesias, the 36-year- old leader of Podemos, has disparagingly labelled the PP and Socialists as “the caste”, who govern for themselves. Vila echoes the accusation. “The main problem is these two big parties, because they have governed for the interests of the privileged minority – their friends,” he says.

“And also corruption, because let’s not forget that Spain is a corrupt country, from the first institution to the last.”

This focus on the supposed rottenness of institutions appears to be paying off, countering the claims of PP prime minister Mariano Rajoy that he is overseeing a solid economic recovery. In Madrid, polls show a Podemos-led coalition has eaten into the Socialist support base and is close behind the governing PP for control of city hall.

But the biggest threat for traditional conservatives across Spain appears to be Ciudadanos. Formed as a nationwide party only a few months ago after starting out as a movement that opposed Catalan nationalism, its sudden rise has sometimes even overshadowed Podemos.

“Corruption is the most important thing right now,” says Ignacio Aguado, the Ciudadanos candidate for the presidency of the Madrid region.

He is speaking shortly before a party rally in a sports hall in Alcala de Henares, east of Madrid. This clean-cut, quietly spoken 32-year-old would seem, at first glance, to have little in common with Podemos, but the determination to end Spain’s long-standing political duopoly sounds remarkably similar.

“[The PP] have been in government for 20 years and they have a certain view of Madrid, the view from behind the glass of the official car,” he says.

“The PP and the Socialists aren’t able to change things. They had the opportunity and they ruined it. Now it’s our time.”