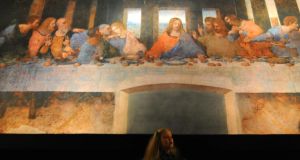 A child walks under a reproduction of The Last Supper by Leonardo da Vinci in Naples. The Holy Chalice, which Spanish researchers claim to have found, is the vessel that Jesus is said to have used at the Last Supper to serve the wine. Photograph: Mario Laporta/AFP

It has been the subject of theological and historical argument for centuries, but Spanish historians now claim to have tracked down the Holy Chalice, the cup from which Christ was supposed to have drunk during his last supper. They believe the 2,000-year-old vessel is in a church in León, in northern Spain.

Margarita Torres and José Ortega del Río have spent three years researching the history of the chalice and, on Wednesday, presented in León a co-written book, Los Reyes del Grial (The Kings of the Grail), containing their findings.

The onyx chalice itself, they explain, is contained within another, antique cup known as the Chalice of Doña Urruca, which sits in León’s basilica of Saint Isidore. The historians say it has been there since the 11th century.

“This is a very important discovery because it helps solve a big puzzle,” Ms Torres told The Irish Times . “We believe this could be start of a wonderful stage of research.”

She said the duo had initially been researching the history of some Islamic remains in the Saint Isidore basilica. However, their discovery of two medieval Egyptian documents which mentioned the chalice of Christ caused them to change course.

Those parchments told of how Muslims took the sacred cup from the Christian community in Jerusalem to Cairo. It was then given to an emir in Denia, on Spain’s Mediterranean coast, in return for help he gave to Egyptians who were suffering a famine.

During medieval times, much of Spain was under Muslim rule, but the cup subsequently came into the possession of Christian King Ferdinand I of Castile.


Scientific dating
The historians’ research has been backed up by a scientific dating process which estimates that the cup in question was made between 200 BC and 100 AD.

Mr Torres and Mr del Río admit that the first 400 years of the chalice’s history remain something of a mystery and they cannot say for sure whether this chalice ever actually touched Christ’s lips.

However, they insist there is no doubt that this is the cup that the early Christians revered as the chalice used at the last supper.

“The only chalice that could be considered the chalice of Christ is that which made the journey to Cairo and then from Cairo to León – and that is this chalice,” said Ms Torres, who teaches medieval history at the University of León.

There have been many theories in the past regarding the whereabouts of the Holy Chalice. A commonly held view in Spain until now had been that it is in the cathedral of Valencia and, in 2006, Pope Benedict gave Mass with the purported relic when he visited the city.

Some claim the vessel is still somewhere in Jerusalem, while another version suggests it is in the cathedral of Genoa in Italy.