Spain was in flux when I covered the dictator’s death 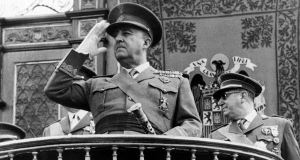 Spanish general Francisco Franco in the 1960s: the dying Franco became the butt of jokes before his death in 1975. Photograph: AFP/AFP/Getty Images

Since October 18th, when the 82-year-old became irreversibly incapacitated, Spaniards, whether covert republicans or loyalist members of Franco’s single party Movimiento, had feared a bloody renewal of the bitter civil war of 1936-39 won by “the Butcher” under the banner of a crusade to protect Christian civilisation.

On Thursday October 30th, I was sent to Madrid by Irish Times news editor Donal Foley to cover Franco’s demise and the coronation of Juan Carlos as king and to file features on post-Franco Spain. A suite in the Gran Hotel Velázquez became my office. That first night Carlos assumed the functions of head of state and was confronted with the challenge of disengaging from a colonial dispute with Morocco in north Africa over the Spanish Sahara.

At popular level, throughout the marathon wait for the historic moment of the general’s passing, life in Madrid went on outwardly unruffled.

Madrilenos followed their usual routine: the affluent middle class frequented favourite restaurants. After-work drinkers were still in the bars. Young people crowded the discos. Workers travelling into the city at 6am stopped for a drink before starting long shifts. Mothers took children to school and headed to the supermarkets . Old men played bowls and smoked their pipes.

Yet, beneath this appearance of nonchalant normality, and despite a growing mood of aburrimiento – boredom – about the prolonging of the general’s life, there was unease.

Curiously, the dying Franco, who had imposed fear or respect, became the butt of jokes. “Why is General Franco a rebellious soldier?” a Madrid lawyer asked me. “Because he won’t get into his box.”

As time ticked on, people became impatient for the end and jokes were directed at the medics who were keeping the old man artificially alive. This was reflected in the joke, “Have you heard the latest medical bulletin?”, a young woman asks her husband. Answer: “Ten exhausted surgeons, signed Francisco Franco.”

So a sense of relief was to the fore in the quiescent way 35 million Spaniards responded 40 years ago today to the funereal music. From before dawn on the streets of city centre Madrid, newspaper vendors were selling stacks of souvenir issues.

Arriba, founded by José Antonio Primo de Rivera, leader of the anti-democratic Falange movement who was murdered by republicans in 1936, carried a front-page photograph of a younger Franco in victory salute with the valedictory headline, “Adiós a Espana”, while Informaciones had a picture of the commander-in-chief laid out in his coffin in military naval-blue uniform replete with star-studded medals.

Its accompanying headline – “Dolor y serenidad tras la muerte de Franco” – showed the fingerprints of state manipulation which was pre-determining the national reaction as one of sorrow and serenity. This spin-doctoring worked but George Orwell would not have been amused.

Official dispatches fixed the official time of death as 5.25am, after the morning dailies went to press. The previous night at 11.15pm medics had removed tubes and drips to allow the general to die.

At 10am prime minister Carlos Arias Navarro sobbed on television, while reading out Franco’s last testament proclaiming himself “a faithful son of the church” who had “no enemies other than the enemies of Spain”.

“After death comes Franco’s last plea to avoid division,” was my main story saying he “left Spain face-to-face with the problem of how to evolve peacefully from the 36 years of authoritarian rule to a system of liberal democracy”.

My second report on “Juan Carlos to rule as king of Spain” noted he faced “the problematic reality of ruling a country long restless for liberal change”, while the right wing might feel provoked “into an armed defence of the status quo”.

Franco’s mourning period was brief. On Friday Carlos was sworn in as king at a joint session of the Cortes (parliament) and a 17-man council of the realm. On Saturday 300,000 mourners chanting “Franco, Franco, Franco” attended open-air Mass in the Plaza de Oriente. This preceded the burial of the general at the Basilica of the Civil War Memorial of the Valley of the Fallen, close to Primo de Rivera who died on November 20th, 1936. Ireland was represented by ambassador Charles Whelan, with *Chile’s dictator, General Pinochet, the only major head of state present.

Few commentators expected Carlos to dismantle dictatorship. Franco’s joker in the pack turned out to be the ace of a democratic Spain.

*This article was amended on Friday, November 20th, 2015, to correct a factual error