National bodywants country to get in line with its European neighbours when it comes to waking, eating, working and sleeping 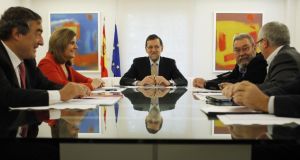 Spain’s long working hours, late nights and fondness for bank holidays are costing it dear, according to an organisation campaigning for the country to radically change how it uses its time.

Most shops and businesses are open from about 10am until 8pm, with many taking a three-hour break between 2pm and 5pm. It can be hard to find a restaurant prepared to serve lunch before 2pm and families often don’t sit down for supper until after 10pm.

Even soccer doesn’t escape the late culture: la liga always has a 10pm kick-off on Saturdays.

The National Commission for the Rationalisation of Working Hours is dedicated to persuading politicians Spain should get in line with its European neighbours when it comes to waking, eating, working and sleeping.


Personal lives
The commission’s president, Ignacio Buqueras, believes late lunches, suppers and bedtimes are not just bad for the economy, but also for Spaniards’ personal lives.

“Our current working hours are closely linked to our leadership in Europe when it comes to lack of productivity, workplace accidents, low birth rate, divorce and school dropout rate,” he told El Comercio newspaper.

His organisation suggests Spaniards shorten their working day, beginning at 7.30am-9am and clocking off at 4.30pm-6pm, with only a short lunch break. It also wants the country to cut down on its frequent midweek days off, believing they also hinder the economy.

Spain has 12 bank holidays scheduled for 2013, compared to nine in Ireland and eight in the UK. Mr Buqueras is particularly concerned by the Spanish habit of creating recreational puentes (bridges): if a holiday falls on a Wednesday, for example, many people will take the Thursday and Friday off too.

The government of Mariano Rajoy proposed moving midweek bank holidays to Mondays or Fridays but has delayed the change, perhaps mindful of how voters cherish extra-long weekends.

Another worry for those seeking to overhaul Spain’s timekeeping customs is the phenomenon known as presentismo – literally “being present” – whereby workers spend long hours in the office to impress their superiors without necessarily doing much.