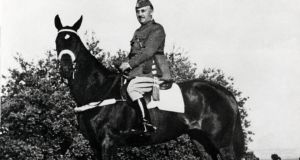 
Spain’s struggle to come to terms with the legacy of its civil war and the ensuing dictatorship has lifted its head again as the governing Partido Popular (PP) blocked an initiative to condemn the right-wing regime of Francisco Franco.

Franco triggered the three-year conflict by leading a military coup against the democratically elected Republican government. After the war, the general ruled Spain until his death in 1975.

However, the conservative PP, which has a majority in congress, rejected the proposal. It was the only party to vote against it.

‘Final triumph’
“The final triumph of Francoism is that Congress keeps worrying about it 80 years after July 18th,” said Pedro Gómez de la Serna of the PP, as he explained why his party opposed the motion.

The proposal had called for “recognition of all the men and women who were victims of the Spanish civil war, as well as those many who suffered afterwards as a result of the repression of the Franco dictatorship”.

Argument still rages in Spain over how many people died during the war and in its aftermath. In his acclaimed account, entitled The Spanish Holocaust , historian Paul Preston estimates Francoists executed over 150,000 civilians during and after the war. He blames the Republicans for some 50,000 executions.

In the late 1970s, the political left and right agreed to put the Franco years behind them through a “pact of forgetting”, in order to build a stable democracy. Subsequent governments did not tackle such a sensitive issue until the Socialist administration of José Luis Rodríguez Zapatero passed the Historical Memory Law in 2007.

This sought to open up archives and encourage the exhumation of victims of Francoism from mass graves. It also contained more symbolic measures, including the removal of reminders of the Franco regime, such as statues and street names, from public places.

The PP opposed that legislation on the grounds that it needlessly dug up the past. Meanwhile, groups on the left said it was too tepid.

Thorny issue
Regardless of yesterday’s vote, the Franco era continues to divide Spain.

Last week, the PP government’s senior delegate in Catalonia awarded a diploma to a group representing the Blue Division – Spanish volunteers who fought for Nazi Germany during the second World War. The ceremony drew fierce criticism from other parties.

“While other states commemorate the end of Nazism and condemn it, acts like [this one] mean that the Spanish state lives a shamefully exceptional situation,” said Alfred Bosch, a congressional deputy for the Catalan Republican Left (ERC).

In a high-profile case in 2010, High Court judge Baltasar Garzón was suspended for overstepping his powers in attempting to investigate the crimes of the Franco era. His suspension was overruled last year, but the human rights abuses have still not been investigated.