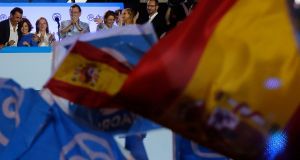 Spain’s caretaker prime minister, Mariano Rajoy, said on Monday he hoped to form a coalition government within a month, after his conservative party emerged from weekend elections with the biggest number of seats but short of an outright majority.

With global financial markets in turmoil over Brexit, Mr Rajoy’s conservative People’s Party (PP) is under pressure to find backing from the second-placed Socialists and smaller centrist party Ciudadanos to form a stable government.

“I have to try to reach a majority to govern because without it, it’s very difficult,” Mr Rajoy told Spanish radio. “I believe that within a month we should have a deal on the basics. It would be nonsense to lose time for several more months.”

The PP won 137 seats, up from 123 in the December poll but short of the 176 needed for an outright majority.

Mr Rajoy said he would propose a coalition between the PP and its longtime Socialist opponents, who won 85 seats. Ciudadanos, which came fourth, could also join if it wanted to, he said.

“There is willingness (from the Socialists) to talk,” Rajoy said. He hoped the talks could be wrapped up by July 19th when the new parliament is operational.

The socialist party has yet to formally take a position on the next government, but it signalled on Monday it was ready to enable a PP-led minority administration. A senior party official said this should happen as soon as possible.

The Socialists are opposed to joining a grand coalition with the PP but political experts say they could allow the PP to govern in minority by abstaining from votes of confidence.

Spain’s economy has so far proven immune from any contagion from prolonged political uncertainty in the euro zone’s fourth-largest economy, but it cannot remain so, analysts say.

“A minority government may not be able to pass material reforms, as it would require unlikely support from a fragmented parliament. In our view, such inertia would hurt Spain’s medium-term growth prospects, especially as we see actions needed on fiscal issues and labour markets,” Barclays bank said in a note.

“In addition, a minority government may not be able to sustain a full four-year mandate,” it also said.