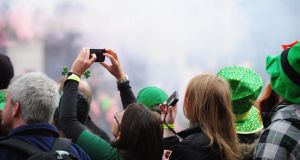 Members of a St Patrick’s Day-themed flashmob in Siberia have reportedly been attacked by a gang who mistook them for gay activists.

According to the Interfax news agency a fight broke out after students at a language school held a belated St Patrick’s Day celebration in a shopping mall in Irkutsk yesterday evening.

According to a police spokesman, members of Easy School held a flashmob and some youths “expressed displeasure at the proceedings”.

“A conflict took place that grew into a fight on the square outside the mall,” the spokesman said.

A law enforcement source told Interfax that the fight was based on a misunderstanding.

“The Easy School members were wearing historic costumes, particularly kilts and their opponents mistook them for representatives of non-traditional sexual orientation,” the source said, using a Russian phrase meaning gay.

The school posted a video of the flash mob on the social networking site VKontakte showing many wearing checked kilts and confirmed its students and teachers were hurt in the fight.

“Yes our students and teachers were among the injured but it could have been any young people who weren’t to the taste of these grey masses,” the school said in a statement.

Police said a teacher at the school suffered mild concussion.