Seven on trial for ‘associating with evil-doers’ of Paris attacks 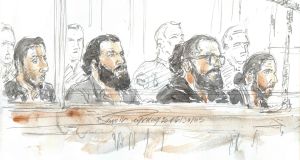 A court sketch shows suspected jihadists, facing charges of criminal association with a view to commit acts of terrorism, during their trial in a Paris courthouse on Monday. Photograph: Benoit Peyrucq/AFP/Getty Images

The ghost of Foued Mohamed-Aggad seemed to hover over the criminal court where the brother and six friends of the Islamic State “martyr” went on trial in Paris on Monday for “associating with evil-doers to prepare terrorist acts”. If convicted, the seven Frenchmen from Strasbourg could be sentenced to 10 years in prison.

“Your son died as a martyr on November 13th,” said the cold text message received by Foued’s mother Fatima last November 30th. His widow, Hadjira, sent the text from Syria. “I want to know where he died,” Fatima replied. “With his brothers in Paris,” Hadjira answered.

Fatima notified French police. A DNA test confirmed that Foued was one of three gunmen equipped with suicide vests who massacred 90 people in the Bataclan music hall.

The trial, which is scheduled to end on June 7th, is not the trial of the Bataclan, defence lawyers stressed. None of the seven has blood on his hands. They spent a few weeks in Syria, before Islamic State in Iraq and the Levant (Isil) transformed itself into Islamic State.

The defendants argue that the atrocities committed by their friend and brother had nothing to do with them.

The story began when Karim and a co-defendant visited Mourad Fares, a radical preacher from Lyon, in Saint Denis in January 2013. Fares travelled to Strasbourg in May to tell the band of buddies about jihad in Syria. In June, they visited him in Lyon. They watched Fares’s propaganda videos and mulled it over for months, smoking waterpipes in a cafe across the bridge in Kehl.

By December 2013, 10 young men, all born between 1989 and 1991,were ready to take the plunge. One was a sports instructor, another a youth organiser. As a precaution, they travelled in small groups to Turkey.

The accused insist they went to Syria to do “humanitarian” work only. This is denied by Fares, who is also in prison awaiting trial. “All those who travelled intended to make armed jihad,” he told French intelligence.

Wire taps published by Le Monde appear to confirm Fares’s allegation. “Yeah, I wanted to make jihad,” Karim told Fatima, his and Foued’s mother. “So what’s the problem? I wanted to fight . . . I didn’t go to do humanitarian work.”

Traffickers led the Strasbourg 10 from Turkey to northern Syria, where they received weapons training in the middle of a war between Isil and Jabhat al-Nusra, which is loyal to al-Qaeda.

The seven co-defendants returned to France between February-April 2014. They may have feared dying like the Boudjellals. Perhaps they were disgusted by the fighting among jihadists.

Karim said in a recorded conversation that some were shopped by traffickers to police when they attempted to visit family members in Turkey. Two had intended to bring their wives back to Syria.

Foued stayed. In March 2014, he wrote to his fiancée Hadjira in Strasbourg: “If I come back to France, it’s not to go to prison. It’s to blow everything up. So don’t tempt me.”

Hadjira approved. She sent the details of her flight to Istanbul, saying: “A woman can have no better than a mujahid.” Foued met her at the border.

In March 2015, Foued prepared to leave Hadjira, who was five months pregnant, to fight in Iraq. “If I stayed in France, I would have been unhappy my whole life,” he told Fatima.

“Allah closed a lot of doors to me, like the army, the police,” Foued wrote. “All things that would have led me away from Islam, to preserve me and bring me to the best army, that of the caliphate, to fight all these idolators and apostates . . . To have a martyr in the family must be an honour and not a sadness.”

In his last message, sent on August 24th, 2015, Foued told Fatima he was preparing a mission with “10 brothers”. He and nine jihadists from Islamic State struck Paris three months later.