‘We will not live in Auschwitz,’ says Serbia’s prime minister Aleksandar Vucic 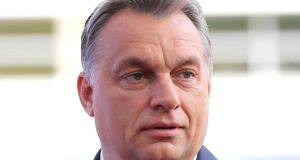 Hungarian prime minister Viktor Orban: criticised for what rights groups call his prejudiced campaign against migrants as he seeks to counter the rising popularity at home of the far-right Jobbik party :

Serbian prime minister Aleksandar Vucic has condemned Hungary’s plan to build a fence along the countries’ border to block migrants, and expressed concern over a series of international incidents putting pressure on Belgrade.

Hungary said on Wednesday it would erect a four- metre-high fence along the 175km of its frontier with Serbia, to stem an ever-quickening flow of people from Syria, Iraq and Afghanistan who want to enter the European Union.

“I am surprised and shocked,” Mr Vucic said.

“Building walls is not the solution. Serbia can’t be responsible for the situation created by the migrants – we are just a transit country . . . Serbia will not close itself in, we will not live in Auschwitz.”

Hungary’s populist government says it cannot continue to accept record numbers of asylum seekers while the EU ponders how to handle the issue, and noted Greece and Bulgaria built fences on their borders with Turkey to block migrants.

EU spokeswoman Natasha Bertaud said Brussels “does not promote the use of fences and encourages member states to use alternative measures”. “We have only recently taken down walls in Europe; we should not be putting them up,” she added.

Rights groups and the European Parliament have criticised Hungary’s prime minister, Viktor Orban, for what they call his prejudiced campaign against migrants, as he seeks to counter the rising popularity at home of the far-right Jobbik party.

Mr Vucic and Serbia are also under growing pressure on several fronts.

Relations with neighbouring Bosnia are strained three weeks before the 20th anniversary of the Bosnian Serb massacre of Bosnian Muslims at Srebrenica, and after last week’s arrest in Switzerland of Bosnian Muslim ex-commander Naser Oric on a Serb warrant.

That was followed by Wednesday’s detention in Slovenia of former Kosovo prime minister Ramush Haradinaj, also on a Serb warrant, which damaged ties between the countries ahead of Mr Vucic’s planned talks with his Kosovar counterpart next week.

Serbia is also preparing for a visit from German chancellor Angela Merkel in early July, and for discussions with the International Monetary Fund on difficult economic reforms.

It is not clear when the Serb arrest warrants were issued, but Mr Vucic said it was “the 50th time that Haradinaj was travelling using that same diplomatic passport, and now he is being arrested a few days before [Kosovo] negotiations.”

“We don’t respond fiercely, we don’t respond with heavy words, not to what has happened with the building of the wall, not to these accelerated arrests all over Europe,” he told Serbia’s B92 news service.