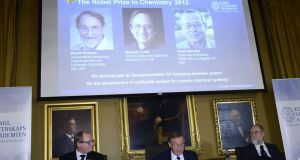 Three US scientists won the Nobel chemistry prize today for pioneering work on computer programs that simulate complex chemical processes and have revolutionised research in areas from drugs to solar energy.

The Royal Swedish Academy of Sciences, awarding the prize of 8 million crowns (€920,000) to Martin Karplus, Michael Levitt and Arieh Warshel, said their work had effectively taken chemistry into cyberspace.

Long gone were the days of modelling reactions using plastic balls and sticks. “Today the computer is just as important a tool for chemists as the test tube,” the academy said in a statement. “Computer models mirroring real life have become crucial for most advances made in chemistry today.”

Powerful computer models, first developed by the three scientists in 1970s, offer a new window onto such reactions and have become a mainstay for researchers in thousands of academic and industrial laboratories around the world.

In drug design, for example, scientists can now use computers to calculate how an experimental medicine will react with a particular target protein in the body by working out the interplay of atoms. “The field of computational modelling has revolutionised how we design new medicines by allowing us to accurately predict the behaviour of proteins,” said Dominic Tildesley, president-elect of Britain’s Royal Society of Chemistry.

Today, all pharmaceutical companies use such computational chemistry to screen experimental compounds for potential as medicines before taking into further tests on animals or people.

The ability to model chemical reactions has also grown as computers have become more powerful, while progress in biotechnology has produced ever more complex large molecules for use in treating diseases like cancer and rheumatoid arthritis. “It has revolutionised chemistry,” Kersti Hermansson, professor in organic chemistry at Uppsala University, said of the computer modelling.

“When you solve equations on the computer, you obtain information that is at such detail it is almost impossible to get it from any other method.” “You can really follow like a movie, in time and in space. This is fantastic detail...You can solve problems, determine why things happen - energy problems, corrosion, chemical reactions, materials, why the properties are how they are and how you could improve them to design better materials.”

The approach has applications in industrial processes, such as materials science, the design of solar cells or catalysts used in cars. For the former, programs can be used to mimic the process of photosynthesis by which green leaves absorb sunlight and produce oxygen.

1 ‘Frustrated and angry’: Thousands march in Dublin to protest death of George Floyd
2 Coronavirus: One more death in Republic as expert warns house parties are ‘disaster’ for containment
3 Covid-19: Easing of restrictions ‘unlikely’ to be speeded-up
4 Large gatherings reported throughout State on bank holiday
5 Covid-19 may be behind fall in rate of sexually transmitted infections
Real news has value SUBSCRIBE