Schengen Area: History and significance of the border-free zone

Concept of free movement a cornerstone of European community since 1950s 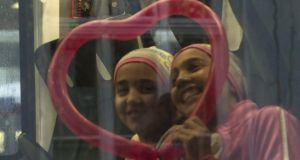 Migrants at Salzburg station in Austria on a train to Germany. Photograph: Guenter Schiffmann/AFP/Getty Images

As the migration crisis continues to overwhelm Europe, one of the biggest casualties of the current impasse may be the Schengen Area, the EU’s border-free travel zone. While the concept of free movement has been a cornerstone of the European community from its inception in the early 1950s, the move to establish a free travel area proved to be challenging, not least because of opposition from Britain.

Nevertheless, in 1985 in the Luxembourg town of Schengen, five of the ten then members of the European Union signed up to the idea of a common travel area. By 1995 the convention came into force and border controls were abolished.

Initially, the Schengen rule existed outside the main body of EU law, and was only incorporated into the EU treaties with the Amsterdam Treaty in 1999. Ireland followed Britain’s lead and chose to opt-out of the scheme.

Since then, Schengen has been a fulcrum of the European Union, underpinning the principle of free movement of people.

In addition to the Irish and British opt-out, newer member states such as Croatia, Romania, Cyprus and Bulgaria are not part of Schengen, though a number of non-EU countries like Switzerland and Norway are.

Given Schengen’s centrality to the idea of the European project, Germany’s move to reinstate border controls, which has triggered similar moves across Europe, is highly significant. The European Commission has played down the significance, pointing out that legally countries can temporarily impose border controls in emergency circumstances. There have also been previous suspensions of Schengen – for example, Germany was permitted to introduce border checks during the G7 summit last year.

But the prospect of widespread border checks within the EU’s internal border-free zone has raised serious questions about the resilience of Schengen. In particular, the migration crisis has exposed the flawed logic of setting up a common travel area without a functioning common asylum and immigration policy.