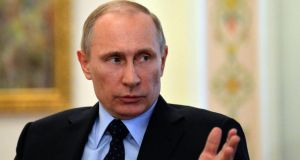 A journalist working for a Kremlin-backed, English-language television station sounded a rare note of dissent on Wednesday announcing her resignation on air to protest the network’s coverage of the crisis in Ukraine.

Russian state television has toed the Kremlin line throughout the Ukrainian crisis, presenting the opposition in Kiev’s Maidan as neo-Nazi, Russo-phobic activists egged on by the west to violent revolution.

While international media has reported the presence of Russian troops wearing unmarked uniforms in Crimea, Russian state broadcasters have seen only “local militia”.

Lev Gudkov, director of the Levada Centre, an independent polling agency in Moscow, said he could not remember a time when state propaganda had been“so aggressive and untruthful”: “Russia has gone from soft authoritarianism to harsh authoritarianism. We are living in a different country.”


Protest at ‘whitewashing’
Liz Wahl, a Washington-based correspondent for Russia Today, broke ranks telling viewers she was quitting to protest the “whitewashing” by the network of the Russian intervention in Crimea. “I am proud to be an American and I believe in disseminating the truth,” she told RT on Wednesday.

Media analysts said Ms Wahl’s statement was unlikely to sway Russian public opinion. Relations between Moscow and Washington are more tense than at anytime since the cold war and Ms Wahl is an American citizen.

Most Russians accept the official narrative of Ukrainian events, according to the Levada Centre. More than two-fifths of respondents in a recent survey saw the ousting of Viktor Yanukovich, Ukraine’s president, as a coup d’etat. Almost half blamed the West for stirring up Ukraine’s troubles.

Vladimir Putin’s always-strong ratings have risen even higher to 70 per cent in the last few weeks, suggesting public approval for the Russian president’s handling of the Ukrainian crisis.

State propaganda has played on historic anxieties to convince most rank-and-file Russians that Ukraine has fallen prey to dangerous ultra-nationalists, said Maria Lipman, scholar in residence with responsibility for social programmes at the Moscow Carnegie Centre.

“We are hearing the word ‘fascism’ all the time. It lends to the perception that evil, anti-Soviet, anti-Russian forces from World War II are on the rise again and have launched an uprising in Ukraine.”

Russian law enforcers have turned the screws on the opposition, rounding up anti-war protesters and moving to silence dissident voices.

Alexei Navalny, Russia’s most vocal opposition activist, has been placed under house arrest and barred from using the internet for participating in an unsanctioned demonstration last week.

A professor at the prestigious Moscow State Institute of International Relations was fired this week after he criticised Russian senators for authorising the deployment of troops in Ukraine.

Andrei Zubov turned the tables on state propagandists, comparing the Russian intervention in the Crimea to the invasion by Nazi Germany of Austria in 1938. “We need to come to our senses and stop,” he wrote in Vedomosti , the Russian business daily. “Historical experience tells us that nothing costs so much.”


Economic toll
Vedomosti is among several Russian dailies that have been analysing the economic toll of the Ukrainian crisis. Russia’s fabulously wealthy oligarchs were among those worst-hit by a sharp fall on the Moscow stock exchange this week, and they are braced for painful US and European sanctions. Yet, so far, the oligarchy has not turned to the Russian media to complain.

One reason for the silence could be the tougher stance that Mr Putin has adopted in the past year. Russian officials have been banned from holding assets abroad and corporations are under pressure to repatriate funds held in offshore accounts.

Mr Putin has changed tack and is “using more stick than carrot with the elites”, says Ms Lipman. “He has switched from a system when loyalty is compensated to one where loyalty is key – or else.”