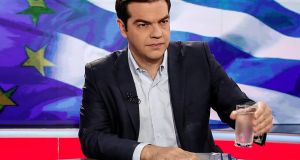 Greece’s deputy prime minister said last night that his government may not proceed with a referendum on Sunday, just hours after the Tsipras administration reiterated its view that the vote was part of its negotiating strategy with its creditors.

In an interview with public broadcaster ERT, Yannis Dragasakis said he believed the government would not rule out taking a political decision to cancel the plebiscite.

He also said that Greece had produced a new, six-point plan in an effort to break the impasse with its lenders. “We are making an additional effort. There are six points where this effort can be made. I don’t want to get into specifics. But it includes pensions and labour issues,” he said.

Without denying the content of the report, he also pointed out that a Greek newspaper claimed that he has urged the prime minister, Alexis Tsipras, to strike a deal with the lenders.

Earlier, the government launched a dedicated website for the referendum. It includes an up-to-the-minute countdown clock.

Mr Dragasakis’s remarks that the government may backtrack on the referendum in the event of a deal followed speculation in the Greek media that Mr Tsipras could come under pressure from within his own party to cancel the referendum in an attempt to save face and avoid being required to engage in what would be an embarrassing U-turn.

However, the parliamentary speaker, Zoi Konstantopoulou, announced that there was no constitutional provision to halt the referendum.

“From the moment that it was decided, there is no constitutional procedure to cancel the referendum,” she was quoted as saying.

Earlier, in a statement announcing the last-ditch proposals, the office of Greece’s prime minister, Alexis Tsipras, said it was still necessary for voters to vote No in the referendum.

“From the outset we made clear that the decision to call a referendum was not the end but the continuation of a negotiation seeking better terms for the Greek people,” the statement said. “Greece remains at the negotiating table,” it added, and Athens was seeking a “viable solution to stay in the euro”.

But speaking to his MPs, Malta’s prime minister Joseph Muscat said Greece told EU negotiators that it would be willing to suspend the referendum if negotiations were reopened and there was an offer and an agreement on required prior actions.

In a statement to the Maltese parliament, Dr Muscat said this could be a breakthrough, a game by Greece to gain more time or political posturing, said a report in the Times of Malta.

According to Greece’s interior minister, Nikos Voutsis, the referendum will cost about €20 million to conduct and that the results would to be clear about 1½ to 2 hours after polling stations close at 5pm Irish time.