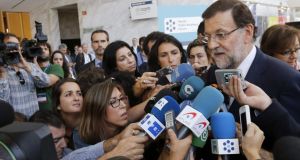 The Spanish government has shelved a controversial reform which sought to give the country one of the strictest abortion laws in Europe.

The Popular Party (PP) administration of Mariano Rajoy unveiled the Bill in December 2013, aiming to push it through parliament by the summer with its congressional majority. That deadline came and went amid intense political and social opposition to the reform, and yesterday Mr Rajoy said he had withdrawn it, citing its divisive nature.

“I think I’ve taken the most sensible decision,” he said. “This is an issue which affects deep and personal convictions of all Spaniards and so I take this very seriously. And as you all know, it’s an issue that generates division in people.”

“This is a triumph for women and for society in general, despite the absolute majority of the PP,” said Carmen Monton of the opposition Socialist Party.

“It was about time that Rajoy understood that you can’t sell the freedom of women.”

The Socialists and other opponents of the reform had portrayed it as a throwback to the era of right-wing dictator Francisco Franco, when women who wanted abortions often went abroad or to back-street clinics.

About 110,00 abortions are registered annually in Spain, a figure which has remained stable in recent years.

Justice minister Alberto Ruiz Gallardon, who oversaw the creation of the reform, resigned soon after its withdrawal yesterday, reportedly angry at being undermined by the prime minister.

The abortion issue has become a major headache for Mr Rajoy. He had hoped it would mobilise conservative voters ahead of this year’s EU elections and next year’s municipal and general elections. But with mass demonstrations against the Bill, polls showing that up to 80 per cent of Spaniards opposed it, and even some senior members of the governing PP voicing their misgivings, the strategy appeared to backfire.

Almost all of the other political parties in parliament welcomed yesterday’s news.

However, Mr Rajoy said the government still plans to alter the current law, to ensure that 16- and 17-year-old girls require parental consent before having a termination, which is not the case at the moment.