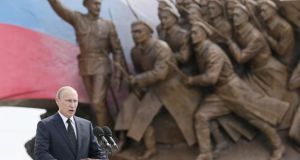 Vladimir Putin: will need to calculate how much hardship ordinary Russians will stomach before questioning Kremlin policies in Ukraine. Photograph: EPA/Yuri Kochetkov

As the European Union voted in tough sanctions this week aimed at coercing the Kremlin to back down in Ukraine, a group of journalists in Russia’s remote far east had another matter in mind.

In an appeal published in a Russian state newspaper they called on lawmakers to award Vladimir Putin the title “hero of Russia”, the nation’s highest honour, for his decision to take over Ukraine’s Crimea.

The deadly crash of Malaysia Airlines flight 17 in Ukraine last month has unleashed the worst geopolitical crisis since the Cold War, one that threatens to condemn Russia to years of international isolation. But most Russians are rejoicing that Crimea is once again part of their country and they have not yet begun to question the Kremlin’s Ukraine policy.

How long this will last will depend on developments in the battlefields of south eastern Ukraine and on how far the US and the EU are prepared to tighten the sanctions noose on Russia’s already fragile economy. For now Putin’s approval ratings are at an all-time high, according to the Levada Center, an independent, Moscow-based polling agency.

Putin could not disguise his fury when Ukrainian president Viktor Yanukovich fled his country as opposition protests turned violent in February paving the way for a pro-European government to take power.

Plans to draw Ukraine into a Moscow-backed union of former Soviet states – a central goal in Putin’s third presidential term – were dashed forever. Instead Ukraine, which is also a Slavic country, was casting off historic cultural and economic ties with Russia for a European future and even possibly eventual Nato membership.

Yet in the eyes of most of his countrymen, Putin won the first round of the crisis, facing down western criticism and taking over Crimea without bloodshed.

A dozen journalists in the Russian far east said this week that Putin deserved the prestigious “hero of the nation” title for his decision to support “brotherly peoples” in Crimea and for the “endurance and firmness of his patriotic views”.

An unrelenting propaganda campaign by Russian state media has buoyed popular support for the Kremlin’s Ukraine policies even as pro-Moscow separatists wreak havoc in the southeast of the country.

Glued to their television screens, Russians are fed round-the-clock updates from the battle fields of Donetsk and Donbass that, accompanied by drumming music, drive home the same confrontational message: Ukraine’s nationalistic new government is responsible for the sickening violence and the US is fuelling the crisis.

References to unnamed “outside forces” bent on weakening Russia at work in Ukraine crop up ever more frequently in the president’s discourse.

“The Kremlin sees the US goal as being not so much stopping Russian support for the Donbass rebels, or even getting Moscow to withdraw from Crimea, but as the toppling of the Putin regime by means of economic pain and popular discontent wrought by sanctions,” said Dmitri Trenin, director of the Carnegie Moscow Center.

“It’s no longer a struggle for Ukraine, but a battle for Russia. If Vladimir Putin manages to keep the Russian people on his side, he will win.”

Before MH17 Putin had hoped to drive a wedge between the US and the EU where some countries such as Germany were wary of imposing sanctions that risked upsetting trade relations with their main gas supplier, Russia. But public outrage in Europe about the crash has hardened attitudes and US president Barack Obama no longer needs to drag EU leaders down the sanctions path. The new “phase three” sanctions approved in Brussels this week go much further than penalties imposed after Russia annexed Crimea, which mainly targeted individuals and companies deemed close to Putin.

Russia’s $2 trillion (€1.5 trillion) economy is now in the EU’s firing line including the critical oil, banking and financial sectors.

Russia has huge financial reserves and the sanctions won’t instantly bring the economy to its knees, according to Timothy Ash, head of emerging markets research at Standard Bank. “Rather they offer the prospect of isolation, stagnation and decline.”

Even before the US and the EU began to impose sanctions, Putin had backed away from modernisation, sidelining liberals in his administration. A crackdown on the opposition that has intensified since the Ukrainian revolution has silenced Kremlin critics. In economic matters, Putin has focused on Soviet-style priorities: self-sufficiency in the defence sector and the ambitious development of Russia’s far east.

However, calls for reform have been drowned out by a powerful group of military-minded nationalists in Putin’s inner circle who welcome the prospect of Russia’s isolation and de-coupling from the west.

Putin has various retaliatory options. He can try to strengthen ties with China, which signed a 30-year gas deal with Russia this year and shares the Kremlin’s desire to end US global dominance. More aggressive moves could involve the derailing of international talks with Iran or counter sanctions against the west.

What Putin can’t risk, says Russian historian and commentator Nikolai Zvanidze, is buckling to western demands and withdrawing support for pro-Russian separatists in Ukraine. “If he gives up the separatists or even gives a signal, he will immediately be accused of weakness and serious problems will arise over his political future,” he wrote on Yezhednevny Zhurnal, the Russian current affairs website.

In the coming months Putin will need to calculate how much economic hardship ordinary Russians will stomach before questioning the Kremlin’s policies in Ukraine.

With almost two-thirds of respondents to a Levada Center poll this week saying they were not afraid of sanctions, there’s no immediate cause for alarm in the Kremlin.

Russians are historically used to putting up with hardship and the pain caused by the sanctions will hardly compare to the suffering unleashed after the collapse of the Soviet Union when the economy went into a tailspin.

“What matters more to Russians [than their material wellbeing] is that a historical injustice has been reversed and Crimea has been reunified with their country,” said Alexei Grazhdankin, deputy director of the Levada Center. “State media knows this and will play on the national consciousness.”