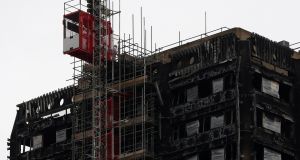 The Grenfell Tower fire took the lives of 71 people, London police have said, after recovering what they believe to be the last of the bodies.

Officers investigating the disaster said on Thursday they had identified the final two victims as 71-year-old Victoria King and her 40-year-old daughter, Alexandra Atala.

“We were devastated to hear of our sister Vicky’s fate and that of her daughter, Alexandra, in the Grenfell Tower tragedy,” their relatives said in a statement.

“Some comfort can come from the knowledge that she and Alexandra were devoted to one another and spent so many mutually supportive years together. They died at each other’s side and now they can rest together in peace. We will remember them always.”

Scotland Yard does not expect to find any more people in the tower.

Those who died included a family of six and at least three families of five, and ranged in ages from a stillborn baby boy to an 84-year-old woman.

Stuart Cundy, the Metropolitan Police commander who is overseeing the investigation, said: “The human cost and terrible reality of what took place at Grenfell Tower affects so many people. Our search operation and ongoing investigation is about those people.

“I cannot imagine the agony and uncertainty that some families and loved ones have been through whilst we have carried out our meticulous search, recovery and identification process.”

Among the dead were a mother who was found clutching her baby daughter. Her husband and another of their children also died in the fire, while a third child survived. An Italian couple who had moved to London together died, as did a family of three and the relative they are believed to have been visiting in the tower.

The Metropolitan Police said on Thursday the tragedy “should never have happened”. The force is conducting a criminal inquiry into the incident and officers have told survivors there are “reasonable grounds” to suspect Kensington and Chelsea council and the organisation that managed the tower block of corporate manslaughter.

Members of 320 households affected by the fire are still living in hotel accommodation, including more than 200 children from the tower and its neighbouring blocks.

An independent report published by the Grenfell Recovery Taskforce said council staff dealing with the traumatised survivors of the blaze needed to display “a greater degree of humanity”.

Scotland Yard initially said it thought the final death toll would be about 80, but revised that estimate down in September. The coroner plans to open and adjourn the final inquests next Wednesday.

In the immediate aftermath of the fire, 400 people were listed as missing. Police said footage showed 223 people escaping the fire, while others were not at home on the night of June 14th, when the blaze took hold.

Police said 70 people died in the fire, and a baby was stillborn afterwards and was added to the death toll.

The search of the tower is nearing its conclusion, with each apartment and all of the communal areas having been checked. The process included a forensic fingertip search by specially trained officers, who examined 15.5 tonnes of debris on each floor. They were supported by forensic anthropologists, archaeologists and odontologists.

While officers do not expect the final stage of the search operation to be finished until early next month, they said it was “highly unlikely there is anyone who remains inside Grenfell Tower”.

Cundy said he had made it a priority that the bodies of those who died were recovered before any other work took place. “It is vital that our search and identification operation was undertaken in a manner that families and loved ones could have complete confidence in.”

Specialist teams working in the tower, as well as the mortuary staff, “pushed the boundaries of what was scientifically possible to identify people”, said Cundy, adding that he had been concerned his team would be unable to recover and identify everyone when he first saw the extent of the damage.

They overcame that “for every person who lost their life, their families and loved ones, and all those for whom Grenfell Tower was home”, he said.

The Met received thousands of calls reporting missing people in the aftermath of the fire, including many reports referring to the same people. One person was reported 46 times and others were identified by slightly different names.

“Even the slightest differences in spellings had to be thoroughly investigated and reconciled. Until that process was complete, those people continued to be regarded as missing,” the force said.

Cundy said police had no reason to underplay the scale of the disaster.

“There will be speculation. Why on earth would we want to cover any of this up?” he said.

He said the key parts of the criminal investigation were how the building was constructed, the refurbishment and the management of the building and the fire-safety measures. Another key point was “how did the fire spread from the flat [where it started] to the rest of the building”.

Cundy said the criminal investigation would be long and complex. Five months on from the fire, no search warrants have been sought or executed and no one has been arrested or interviewed under caution.

He said the remains of the tower were still a crime scene and searches and work there would continue until at least spring 2018.

When police stop treating it as a crime scene and finish their work there, Cundy said, they would not object to its demolition if its owners wanted to do so.

Police said a total of eight fraud investigations were under way relating to the disaster, with one person already convicted of making a fraudulent claim.