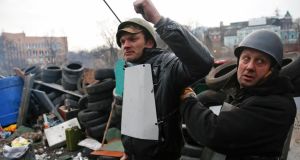 An anti-government protester puts armour on his comrade at a barricade in Kiev today. Photograph: Baz Ratner/Reuters 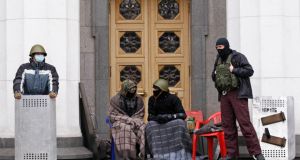 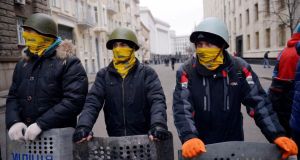 Protesters stand guard in front of presidential administrative building in central Kiev. According to media reports, the offices of president Viktor Yanukovych are unguarded and opposition protestors are in full control of the government district. Photograph: Laszlo Beliczay/EPA 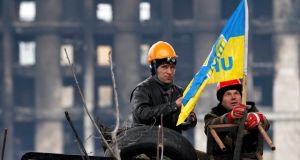 Two anti-government protesters put a flag on the top of a barricade in the Independence Square in Kiev. Photograph: Baz Ratner/Reuters 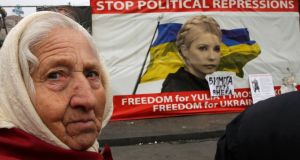 A woman looks on in front of a poster showing jailed Ukrainian opposition leader Yulia Tymoshenko in central Kiev. Ms Tymoshenko’s spokesperson said today she has been released from prison. Photograph: Yannis Behrakis/Reuters

Ukrainian president Viktor Yanukovich denounced today what he described as a “coup d’etat” by gangsters who were terrorising Ukraine and said he would not flee the country or let it be torn apart.

Mr Yanukovich spoke today as parliament today voted to dismiss the president, setting an election for May 25th, and opposition leader Yulia Tymoshenko was freed from the hospital where she had been held under prison guard for most of the time since she was convicted in 2011.

Refusing to recognise the legitimacy of laws and resolutions approved by parliament today, after the speaker loyal to him quit citing ill health, Mr Yanukovich said: “I will sign nothing with gangsters who are terrorising the whole country.”

In an interview with Ukrainian television station UBR, the president looked exhausted but appeared to have suffered no injuries after an incident in which he said his car had come under fire.

“The events witnessed by our country and the whole world are an example of a coup d’etat,” said Mr Yanukovich, who stood in a dark suit and blue tie. “We are witnessing the return of the Nazis, the time when in 19030s the Nazis came to power in Germany and Austria. It is the same now ... I will do all I can to protect the country from splitting and to prevent bloodshed.”

UBR did not say where the interview was conducted although Mr Yanukovich is thought to be in the northeastern city of Kharkiv.

A day after signing an agreement with the opposition on resolving weeks of crisis, he has lost control of his presidential headquarters and the interior ministry which controls the police has turned against him.

“I will now travel in the southeast of the country. I will continue to meet people,” he said. “I will stay on the territory of Ukraine. I will call on all international observers and mediators to stop the gangsters.”

He said his car had been shot at but did now say where or when. “I am not afraid. I feel sorrow for my country,” he told UBR.

Protesters seized the Kiev office of the president as the pro-Russian leader’s grip on power rapidly eroded following bloodshed in the Ukrainian capital.

Ultra-Radical Ukrainian opposition group Right Sector said today it would continue protests in the capital Kiev despite parliament’s vote to oust President Yanukovich. “The Right Sector will not disperse,” the group, one of several that is involved in the protests in central Kiev, said in a written statement. “It is not the time to celebrate. Now we must be more united than before.”

Parliament voted this morning to free Mr Yanukovich’s arch-rival, jailed former prime minister Yulia Tymoshenko. The former prime minister, a bitter rival of President Viktor Yanukovich, waved to supporters from a car as she was driven out of the hospital in the northeastern city if Kharkiv, a Reuters photographer said. Tymoshenko (53) was jailed in 2011 for abuse of office over a gas deal with Russia but her supporters and Western leaders say her trial was politically motivated.

The newly-installed interior minister today declared that the police were now behind the protesters they had fought for days, giving central Kiev the look of a war zone with 77 people killed, while central authority crumbled in western Ukraine.

At the president’s headquarters, Ostap Kryvdyk, who described himself as a protest commander, said some protesters had entered the offices but there was no looting. “We will guard the building until the next president comes,” he told Reuters. “Yanukovich will never be back.”

The grounds of Mr Yanukovich’s residence outside Kiev ware also being guarded by “self-defence” militia of protesters.

The quick disintegration of Mr Yanukovich’s government mark a setback for Russian president Vladimir Putin, who had counted on the Ukrainian leader to bring Ukraine into a Eurasian Union to help rebuild as much of the old Soviet Union as possible.

The government, still led by a Yanukovich ally, said it would ensure a smooth handover of power to a new administration.

“The cabinet of ministers and ministry of finance are working normally,” the government said in a statement. “The current government will provide a fully responsible transfer of power under the constitution and legislation.”

Mr Yanukovich, who enraged much of the population by turning away from the European Union to cultivate closer relations with Russia three months ago, made sweeping concessions in a deal brokered by European diplomats yesterday after days of pitched fighting in Kiev, with police snipers gunning down protesters.

But the deal, which called for early elections by the end of the year, was not enough to satisfy demonstrators, who want Mr Yanukovich out immediately in the wake of the bloodletting.

Parliament has quickly acted to implement the deal, voting to restore a constitution that curbs the president’s powers and to change the legal code to allow Ms Tymoshenko to go free. Today, lawmakers voted to speed her release by eliminating a requirement that the president approve it.

The speaker of parliament, a Yanukovich loyalist, resigned and parliament elected Oleksander Turchynov, a close ally of Ms Tymoshenko, as his replacement.

Events are moving at a rapid pace that could see a decisive shift in the future of a country of 46 million people away from Moscow’s orbit and closer to the West, although Ukraine is near bankruptcy and depends on promised Russian aid to pay its bills.

“Millions of Ukrainians see only one choice - early presidential and parliamentary elections.” Mr Klitschko then tweeted that an election should be held no later than May 25th.

The senior security source said of Mr Yanukovich: “Everything’s ok with him ... He is in Ukraine.” Asked whether the leader was in Kiev, the source replied: “I cannot say.”

The UNIAN news agency cited Anna Herman, a lawmaker close to Mr Yanukovich, as saying the president was in the northeastern city of Kharkiv, in a mainly Russian-speaking province.

Two protesters in helmets stood at the entrance to the president’s Kiev office. Asked where state security guards were, one, who gave his name as Mykola Voloshin, said: “I’m the guard now.“”

Dmytro Pylipets (32), a doctor from Kharkiv who was wearing military fatigues and helmet, said: “I think Yanukovich is frightened and panicking. I feel we are almost there. The Maidan revolution is almost done.”

The release of Ms Tymoshenko would transform Ukraine by giving the opposition a single leader and potential future president, although Mr Klitschko and others also have claims.

She was jailed by a court under Mr Yanukovich over a natural gas deal with Russia she arranged while serving as premier. The European Union had long considered her a political prisoner, and her freedom was one of the main demands it had for closer ties with Ukraine during years of negotiations that ended when Mr Yanukovich abruptly turned towards Moscow in November.

“According to Ukrainian law my mum is already a free person,” daughter Yevgenia Tymoshenko told reporters, saying she was on her way to meet her mother in Kharkiv where she has been held in hospital under treatment for back pain.

A spokeswoman for the former prime minister (53), said that although the moves in parliament already made her a free woman, Ms Tymoshenko had not yet been released or left the hospital.

In a sign of the quick transformation, the interior ministry responsible for the police swung behind the protests. It said it served “exclusively the Ukrainian people and fully shares their strong desire for speedy change”.

Eastern regional bosses meeting in Kharkiv adopted a resolution saying parliament’s moves “in such circumstances cause doubts about their ... legitimacy and legality.

Kharkiv Governor Mikhaylo Dobkin told the meeting: “We’re not preparing to break up the country. We want to preserve it.”

Mr Yanukovich’s broad concessions yesterday ended 48 hours of violence that had turned the centre of Kiev into an inferno of blazing barricades. Without enough loyal police to restore order, the authorities had resorted to placing snipers on rooftops who shot demonstrators in the head and neck.

The foreign ministers of France, Germany and Poland negotiated the concessions from Mr Yanukovich, in what the Kremlin’s envoy acknowledged as superior diplomacy.

“We joined the talks later, which wasn’t very right,” Russian envoy Vladimir Lukin was quoted as saying by Interfax.

Mr Yanukovich (63), a burly former Soviet regional transport official with two convictions for assault, did not smile during a signing ceremony at the presidential headquarters yesterday.

‘You’ll all be dead’

It took hard lobbying to persuade the opposition to accept the deal, and crowds in the streets made clear they were not satisfied with an arrangement that would leave Mr Yanukovich in power. Video filmed outside a meeting room during yesterday’s talks showed Polish foreign minister Vladislaw Sikorski pleading with opposition delegates: “If you don’t support this, you’ll have martial law, you’ll have the army, you’ll all be dead.”

Anti-government protesters remained encamped in Independence Square, known as the Maidan or “Euro-Maidan”, through the night. They held aloft coffins of slain comrades and denounced opposition leaders for shaking Yanukovich’s hand.

With borders drawn up by Bolshevik commissars, Ukraine has faced an identity crisis since independence. It fuses territory integral to Russia since the Middle Ages with former parts of Poland and Austria annexed by the Soviets in the 20th century.

In the country’s east, most people speak Russian. In the west, most speak Ukrainian and many despise Moscow. Successive governments have sought closer relations with the European Union but have been unable to wean their heavy Soviet-era industry off dependence on cheap Russian gas.

The past week saw central state authority vanish altogether in the west, where anti-Russian demonstrators seized government buildings and police fled. Deaths in Kiev cost Mr Yanukovich the support of wealthy industrialists who previously backed him.

Mr Putin had offered Kiev $15 billion in aid after Mr Yanukovich spurned an EU trade pact in November for closer ties with Moscow. The fate of those funds is now unclear.

Washington, which shares Europe’s aim of luring Ukraine towards the West, took a back seat in the final phase of negotiations, its absence noteworthy after a senior US official was recorded using an expletive to disparage EU diplomacy on an unsecured telephone line last month.