Proposal for Turkey to reaccept all refugees in EU deal 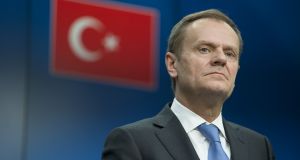 Donald Tusk, president of the European Union, listens during a news conference following a meeting of EU leaders in Brussels on Monday. Photograph: Jasper Juinen/Bloomberg 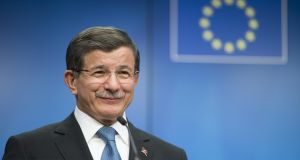 EU leaders stopped short of reaching a final agreement on a new EU-Turkey deal after Ankara surprised leaders by pushing for a new range of demands in exchange for help with the migration crisis.

Following an EU-Summit that stretched into the night, EU leaders broadly endorsed the framework of the deal, which includes fresh demands for cash from Turkey, but will return to the issue at an EU summit on March 17th and 18th.

Among the proposals under discussion last night was a plan for Turkey to re-accept all refugees – Syrian and non-Syrian – back from Greece in exchange for a resettlement programme.

A draft action plan seen by The Irish Times shows that EU leaders were considering doubling the money pledged to Turkey in November to €6 billion by the end of 2018. In addition, the EU would agree to ease visa requirements for Turkish citizens travelling to the Schengen free-travel area by June, having previously agreed to bring forward the date to October.

The concessions under discussion on Monday night followed an intense day of negotiations on the refugee crisis in Brussels. While the summit had expected to be finished by early evening, Turkish prime minister Ahmet Davutoglu tabled fresh demands of the EU at lunchtime in exchange for a commitment to reduce the number of refugees arriving to the EU and to readmit illegal migrants back into Turkey. But opposition from a number of member states, including Sweden, to the new demands meant that a final decision was pushed forward to the next EU summit in ten days’ time.

Speaking after the Summit, European Council President Donald Tusk said he was confident he had a “common understanding with Prime Minister Davutoglu” on strengthening their cooperation so as to achieve concrete results on the ground “within days.” Discussions are to continue at official level over the next few days ahead of next week’s summit.

With 100,000 migrants and refugees expected to reach Greece this month alone and more than 30,000 asylum seekers trapped in Greece, the European Union is grappling to respond to Europe’s biggest refugee crisis since the Second World War.

But Turkey has argued that is already shouldering a disproportionate share of the burden, having accepted more than 2.7 million refugees, and is calling for more aid in exchange for help in reducing the number of migrants leaving Turkey for the EU.