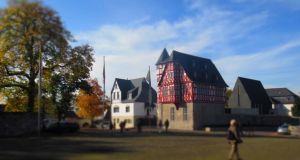 Pope Francis had clear words at morning Mass on Monday. Hours before he met Germany’s so-called bling bishop to ask him about his €31 million new residence in Limburg, the pope – who called for a “poor church for the poor” – warned how “greed destroys people, families and human relationships”.

At noon, Pope Francis granted a 20-minute audience to the German bishop with the multi-barrelled name, Franz-Peter Tebartz-van Eltz, and an unenviable reputation in the German media.

On his watch, the small diocese of Limburg, near Frankfurt, approved a sprawling residence costing €5 million. The final bill is likely to be six times that, thanks to expensive fittings and special requests by its incoming resident: a now notorious €15,000 free-standing bath, €200,000 on special windows and €350,000 for wardrobes.

The anger over the case is spiralling out of control, prompting a Frankfurt bishop to warn of a “meltdown in the church”.

Earlier on Monday Pope Francis had another visitor: Cardinal Joachim Meisner of Cologne. The audience had been long-planned, the German cardinal’s spokesman insisted, but it was an interesting coincidence: the diocese of Cologne is considered the wealthiest in Germany, if not the world.

The focus on Limburg has widened in recent days, casting a critical spotlight on the German Catholic church and asking if its considerable wealth is compatible with the policies of the new pope.

Alongside its pastoral work, the church in Germany is one of the country’s largest employers, employing over half a million people in the Caritas charity, schools and care homes.

It has other more profane business interests too: a television production company that makes crime shows, a news agency and a radio station, many breweries and vineyards, as well as a mineral water company.

Even greater controversy surrounds the €5 billion it earns annually in church tax, an obligatory contribution for all German church members, Catholic and Lutheran.

The tax is compensation for the Napoleonic-era disappropriation of church property in 1803 and is collected at source, for a fee, by the German tax authorities.

Both sides say it is an efficient arrangement that saves money, but critics say it calls into question the ostensible separation of church and state. The church receives about another estimated €20 billion in state subsidies annually to cover other costs such as the running of religious schools.

In addition, the German state pays the salaries of all bishops and high-ranking church officials. Their pay is coupled to the civil servant pay scale, thus a bishop is considered equivalent to a secretary of state and earns between €8,000 and €10,000 a month. The total payroll cost to the state: €460 million annually.

Two years ago, political scientist Carsten Frerk compiled the first exhaustive list of church wealth, which he estimates at €435 billion. The main figures: €150 billion in savings and shares; €220 billion in property (excluding churches); €65 billion in foundations and other titles.


Pension time bomb
Church officials deny it is as wealthy as it seems and points out that, as a massive employer, it faces a ticking pension time bomb through the increasing number of elderly priests.

Faced with the continuing Limburg scandal, however, a growing number of inner- church voices suggest the time has come to open their books to external auditors – and even the taxman.

“The church should bring transparency to its diocesan financial affairs,” says Norbert Feldhoff, provost of Cologne Cathedral and former vicar- general – administrative head – of the diocese. “We have to face up to the debate over our finances.”

Without proper data, he said, the speculation and criticism was likely to continue. Pope Benedict was said to be highly critical of the church in his homeland, but Frerk says it is unlikely the church will provide full transparency.

“For the big churches, transparency is very damaging to their business plan,” he told the Frankfurter Allgemeine daily. “Nobody wants to donate to a rich organisation.”