Power restored after Turkey hit by outages across country 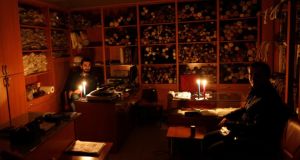 Shop workers sit in candle light at their shop after a major power cut in Istanbul. Photograph: Sedat Suna/EPA

A major power outage hit cities and provinces across Turkey on Tuesday, including the capital of Ankara and the biggest city, Istanbul, where parts of the subway and tram system shut down and shopping malls plunged into darkness. Prime Minister Ahmet Davutoglu said all possible causes of the outage were being investigated and did not rule out sabotage, but said that trouble with transmission lines was the most likely reason for the problem.

People carrying jerry cans queued at petrol stations to buy fuel for generators as the power cut dragged on for more than four hours. Road junctions were clogged as traffic lights went out. “Our main target right now is to restore the network. This is not an incident that we see frequently,” Energy Minister Taner Yildiz said during a trip to Bratislava, in comments broadcast on Turkish television.

“Whether or not terrorism is a high possibility or a low one I can’t say at this stage. I can’t say either whether it is a cyber attack,” he said in response to questions from reporters. Yildiz later said around 80 per cent of Istanbul’s power supply had been restored and that the rest of the country would follow soon.