Pope Francis denounces use of religion to foment violence 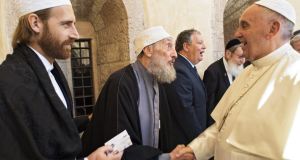 Pope Francis greets participants in a multi-faith day of prayer for peace, in Assisi, on Tuesday. Photograph: EPA/Osservatore Romano

Pope Francis on Tuesday denounced “indifference”, calling it the “great sickness of our time” and a “new and deeply sad paganism” which renders people lethargic and insensitive.

The pope was speaking in Assisi, on the 30th anniversary of the World Day of Prayer for Peace called by Pope John Paul II in October 1986. Then as now, representatives of the world’s religions, including Muslims, Jews, Buddhists, Shintaoists, Hindus, Zorastrians and many others came together in this Umbrian hillside town, home of Saint Francis, to pray for peace.

Speaking in a joint final ceremony on the steps of the Basilica of San Francesco, the pope said that today’s world had a “profound thirst for peace”, arguing that “diverse religious traditions” were not “the cause of conflict”.

“Once again, gathered here together, we declare that whoever uses religion to foment violence contradicts religion’s deepest and truest inspiration,” he said.

During that prayer service, Archbishop of Canterbury Justin Welby said modern man lives “in a world which struggles to distinguish between what something costs and what it is worth”.

As is his wont on occasions like this, Pope Francis not only shook hands with the VIPs yesterday (and it took him about an hour to shake all the hands) but he also met migrants, refugees and victims of war.

Sitting at his lunch table yesterday were the Archbishop of Canterbury; the Ecumenical Patriarch of Constantinople, Bartholomew I; the vice president of the Al Azhar University in Egypt, Abbas Shuman; and the international director of Global Jewish Advocacy , Rabbi David Rosen.

Also breaking bread with the pope were refugees from Syria, Eritrea, Mali and Nigeria, some of whom arrived in Italy via humanitarian corridors organised by the Community of Sant Egidio, the Rome-based lay movement that organised Tuesday’s day of prayer.

Among the many speakers over the three days of Assisi meetings was Irish Nobel Peace Prize winner, Mairead Maguire, who addressed a seminar on integration and dialogue in modern Europe.

Speaking to The Irish Times, Ms Maguire, a leader of the 1976-1980 Northern Ireland peace movement said: “Peace works, peace is the only thing that works ... we need a theology of peace. In three trips to Syria, we found the same thing on the ground that we had found in Northern Ireland, both places where the majority of the civil community wanted peace but found it hard to make its voice heard.

“In 1976, we said that violence does not work. We recognised that we came from an ethnically and politically deeply divided community, we had to build a reconciliation, a non-violent culture, learn to live and work together. That’s what we are seeing here today at Assisi with people from different cultures and religions all sitting down together.”