Pope arrives in Azerbaijan to back multi-faith society

Country is predominantly Muslim, fewer than 300 Azeris are Catholics 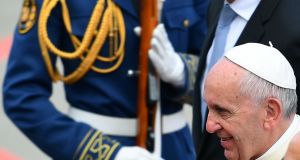 Pope Francis is welcomed by a presidential delegation upon his arrival at the International Airport of Baku. Photograph: Vincenzo Pinto/AFP/Getty Images

Pope Francis has arrived in Azerbaijan for a day-long visit aimed at encouraging the country’s multi-faith society and overlooking recent criticism of a referendum that extends the president’s term and powers.

Azerbaijan, the second-largest Shia Muslim nation after Iran, has a tiny Catholic population - fewer than 300 Azeris are Catholics.

Several thousand foreigners make up the rest of the Catholic community, and Azeri Jews, Zoroastrians and other minorities round out Azerbaijan’s religious mix.

Francis will meet representatives of all the main faiths as well as president Ilham Aliyev before heading back to Rome on Sunday night after a weekend visit that took him first to Georgia.

Mr Aliyev’s opponents, as well as human rights organisations including Amnesty International and Freedom House, said the moves would cement a dynastic rule in the oil-rich Caspian Sea nation.

The Azerbaijani government has rejected the criticism, saying the constitutional amendments are intended to cut red tape and speed up economic reforms.

Francis will celebrate Mass in the Catholic church that was built after Saint John Paul II visited Azerbaijan in 2002. After that visit, the president donated a plot of land on the outskirts of the capital, Baku, and local Muslims and Jews helped build it.

“I cannot contain my boundless joy,” 61-year old parishioner Eva Agalarova said of Francis’ visit. “It is both joy and happiness that the faith gives me.”

Local Azeri media has not given much attention to the papal visit and many were unaware of the forthcoming Mass. But Baku’s Muslim residents still welcomed Francis’ visit.

“Islam is a tolerant religion and it accepts all faiths,” said Aygun Mikayilova. “I will welcome the pope’s visit if he is bringing a message of peace, calm and tolerance.”

Mr Aliyev, in office since succeeding his father in 2003, has firmly allied the Shia Muslim nation with the West, helping secure its energy and security interests and offsetting Russia’s influence in the strategic Caspian region.

Brazil’s President Jair Bolsonaro says he has tested positive for Covid-19 16:40
The music from the temple was ‘Lebanon does not want to die’ 16:26
HIV patient in remission offers hope to millions living with virus 16:15
Ex-Kasabian singer Tom Meighan avoids jail for assaulting former fiancee 15:29
Allegations Johnny Depp is a ‘wife beater’ are complete lies, court told 13:20