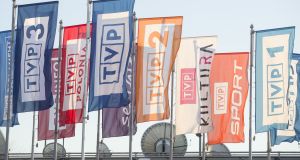 While competitors report on massive anti-government street demonstrations TVP can be relied on to find a camera angle that portrays the marches as a group of stragglers with a flag or two. Photograph: Getty Images

If there are awards for news propaganda, one strong contender for this year’s best newcomer category is Polish state broadcaster TVP.

For years TVP’s management floor has boasted the hardest-working revolving door in Warsaw, spinning reliably after every a change of government. The door spun again after last October’s general election, when the winning national conservative Law and Justice party (PiS) installed Jacek Kurski as director.

A hard-right conservative ally of PiS leader Jaroslaw Kaczynski, Kurski once accused ex-prime minister Donald Tusk of covering up that his grandfather served in the Nazi Wehrmacht. Kurski knew it was untrue, he said later, but defended it as effective propaganda.

Since Kurski took the helm at TVP – prompting large street demonstrations – the question is now less whether TVP is pumping out propaganda, but whether it is effective.

After a cull of senior management and journalists, those who remain report a culture of fear and self-censorship. Ratings are sliding fast as coverage hits new, comic lows.

While competitors report on massive anti-government street demonstrations – 200,000 plus two weeks ago in Warsaw – TVP can be relied on to find a camera angle that portrays the marches as a group of stragglers with a flag or two.

Speeches by PiS leader Jaroslaw Kaczynski are given the prominence of a state address, though he is neither prime minister nor president, and TVP covers his live Facebook chats with followers as events of national significance.

Law and Justice said the Bill, creating a new “national media”, was necessary to ensure objectivity and end biased coverage. But experienced journalists say the government has replaced Poland’s culture of occasional political interference at TVP with straightforward propaganda.

Jaroslaw Kulczycki worked on and off as a TVP journalist and host for 20 years. As a long-time PiS critic, he didn’t expect to last long after the election.

Last year he was reprimanded for asking a studio guest – rabbiting PiS talking points verbatim on-air – if he was on the party payroll.

Earlier this year, he organised a letter of protest, signed by 1,000 TVP staffers, against a colleague’s suspension for her combative interview with the new culture minister.

“I was asked into his office and given my walking papers,” he said. “It was a relief, to be honest, because working for TVP now is terrible and would have been costly for my personal brand as a journalist.”

Another TVP journalist, Grzegorz Nawrocki, left before he was pushed, depressed by levels of control that ran the gamut from explicit to insidious.

“Once a colleague asked me not to ask a politician a particular question and, when I refused, she started weeping, saying ‘But then we’ll all get into trouble’,” he said.

“This is the ethical dilemma my ex-colleagues now face: to rock the boat for all or to go along with things.”

Similar changes are under way at the Polish state-owned news agency PAP. Its new head has come directly from the foreign ministry and, similar to TVP, senior editors will be fired later this summer. They can reapply for their old jobs, but with no guarantee of success.

PAP journalists say the mood is toxic, with self-censorship as effective as direct censorship from above.

“Many people are afraid, they have mortgages and know it’ll be difficult to find a new job,” said one PAP journalist, who asked not to be named. “Political influence is an eternal problem in Polish state-owned media. But the difference now is the scale. PiS is not trying to even hide what they are doing.”

Given about 200 Polish journalists have been fired or have resigned from state-owned media of late, the new station will have plenty of talent to choose from.