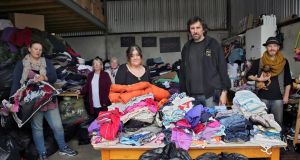 On a serene September afternoon, the foothills of MacGillycuddy’s Reeks seem as far removed as possible from the chaotic scenes in Continental European towns where refugees are massing.

Yet the unfolding humanitarian tragedy in places such as Greece, France and Hungary has even left an impression on this isolated corner of Co Kerry, eliciting a passionate response from locals who feel a duty to contribute what they can.

While many in the area begin furtive preparations for the trip to Dublin for the All-Ireland football final, Tony and Gillian Taylor-Smyth are focusing their efforts on an upcoming 5,000km road trip to Greece to distribute clothes, supplies and water to the destitute masses who continue to gather on the country’s borders.

Six weeks ago they started an appeal to fill their family car and a trailer with donated clothes and blankets to help alleviate the suffering of those fleeing war and upheaval in the Middle East and Africa.

“We decided we’re going to go to Greece so we put out a call for anyone willing to give small donations because we’re going to take our car and trailer across.

“And in the span of four days it went absolutely ballistic. It’s all through word-of-mouth and the kindness of people,” says Tony Taylor-Smyth, standing in front of a barn that is heaving with runners, jumpers, belts, jackets and all manner of other items.

He rents out caravans for a living, but chose to forgo the custom from one of his firm’s busiest periods last weekend with the Electric Picnic festival to dedicate himself fully to gathering donations.

With round-the-clock assistance from their three children, along with about two dozen volunteers who have come to the farm in the last two weeks to help with sorting and bagging, they aim to have amassed enough supplies to fill a 40ft container along with three lorries for the journey.

Interest in the grassroots operation – which uses the moniker Help for Humans on social media – has peaked since images of the lifeless body of three-year-old Syrian refugee Aylan Al-Kurdi appeared.

That incident is one which has stood out for many in recent weeks and months, and both Mamie Stack and Angela Norgrove – Listowel residents who travelled an hour and 20 minutes to volunteer with the Taylor-Smyths in Rathmore – say it is the main inspiration for their activism.

On the other side of the country, another prospective convoy is quickly gathering pace.

In the Jigsaw community centre in Dublin’s north inner city, a group of about 250 people sorts through bags of clothes, toiletries and medical supplies donated by the public. They will be taken to Calais in France on October 1st.

Through a collaborative effort by strangers concerned about the crisis, the premises is a hive of activity, and a meticulous level of organisation is evident thanks to the work of people such as Killian Raynor (22).

“This is the beginning of something that’s going to change this country for the better.

“This is completely grassroots, it’s started from people’s hearts,” he says, as Imam of the local Talbot Street mosque, Jameel Mutoola, files past holding black bags brimming with the proceeds of recent collections.

He may live miles away in Leopardstown, but 11-year-old Liam Burgess is only too happy to help his mother and other colleagues prepare more than 300 bags of supplies for their imminent transfer to northern France.

“I want to help out a lot with the people in Calais. My mother always says there are bigger problems in life, and I just want to help people who have huge problems.”

For software engineer Enda Sexton, it is simply a matter of common decency and compassion for the suffering of fellow humans which motivates his efforts.

“If you refuse to react to human-rights issues, you’ve decided that the people experiencing the issues are no longer grouped with those who are deserving of human rights,” says the Greystones native, who hopes to be part of the cavalcade of five lorries, 20 vans and 100 people when it leaves in three weeks’ time.