A video posted online alleged to be from the hackers collective, Anonymous, says they are preparing to unleash waves of cyberattacks on Islamic State following the attacks in Paris last week that killed 129 people. Video: Reuters 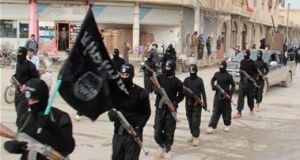 The massacre in Paris, following bombings in Beirut, Lebanon, and the downing of a Russian passenger jet over Egypt, all claimed by the Islamic State, reveals a terrorist organization that has changed in significant ways from the West’s initial understanding of it. Photograph: Reuters 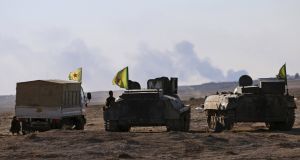 Fighters from the Democratic Forces of Syria stand near their infantry fighting vehicles around the al-Khatoniyah lake area after they took control of it from Islamic State militants, near al Houl town in Hasaka province, Syria on Saturday. Photograph: Reuters

Defying Western efforts to confront Islamic State on the battlefield, the group has evolved in its reach and organisational ability, with increasingly dangerous hubs outside Iraq and Syria and strategies that call for using spectacular acts of violence against civilians.

But even as the militant attacks were playing out across Paris on Friday night, the United States carried out an airstrike - planned days in advance - against the leader of Islamic State in Libya, which has emerged as a pivotal stronghold for the group in North Africa. American and British Special Operations forces have for months been conducting secret surveillance missions in Libya to monitor the rise of fighters aligned with the Islamic State.

The massacre in Paris on Friday, following bombings in Beirut, Lebanon, and the downing of a Russian passenger jet over Egypt, all claimed by Islamic State, reveals a terrorist organization that has changed in significant ways from the West’s initial understanding of it as a group focused on holding territory in Syria and Iraq and building a caliphate, or Islamic state.

And actions by the United States and its allies - including a Western bombing campaign of Islamic State-held fighting positions and oil facilities, coordinated with a ground offensive by Kurdish forces to cut off a major supply line - foreshadow how the West might respond to the growing menace in the coming weeks.

Islamic State, also known as Isis, Isil or Daesh, has for the first time engaged in what appears to be a centrally planned campaign of terrorist attacks aimed at inflicting huge civilian casualties on distant territory, forcing many counterterrorism officials in the United States and in Europe to recalibrate their assessment of the group.

“They have crossed some kind of Rubicon,” said William McCants, a scholar at the Brookings Institution and author of The Isis Apocalypse. “They have definitely shifted in their thinking about targeting their enemies.”

When Islamic State’s Egyptian arm claimed responsibility for blowing up a Russian charter plane over Sinai two weeks ago, some analysts wondered if the group’s so-called Sinai Province of Islamic State had acted on its own and leapt out in front, even at the cost of risking a Russian military backlash on the parent group in Syria and Iraq.

But the attacks last week in Paris and Beirut, which Islamic State also said it carried out, appear to have settled that question and convinced even sceptics that the central leadership was calling the shots.

“There is a radical change of perception by the terrorists that they can now act in Paris just as they act in Syria or Baghdad,” said Mathieu Guidère, a terrorism specialist at the University of Toulouse. “With this action, a psychological barrier has been broken.”

Indeed, at a time when many Western officials were most concerned about Islamic State-inspired, lone-wolf attacks - terrifying in their randomness but relatively low in casualties - the attacks in Paris have revived the spectre of coordinated, high-casualty attacks planned with the involvement of a relatively large number of perpetrators.

American and European authorities said the Paris assault bore the hallmarks of complex attacks conducted by Al Qaeda, or of the Mumbai plot in 2008, when 10 Islamic militants carried out a series of 12 shootings and bombings in the Indian city, lasting four days and killing 164 people.

“Their goal is an unconventional urban guerrilla war,” said Franck Chaix, an officer of the Gendarmerie, France’s semi-military police force, and a former head of its special intervention force, G.I.G.N.

Al Qaeda, the Islamic State’s principal forebear, built its identity around spectacular terrorist attacks because its leaders saw themselves as insurgents seeking to overturn Arab governments that they deemed apostates. Al Qaeda wanted to bait the West into military actions that would destabilize Arab states. The Islamic State, in contrast, has increasingly styled itself a state and, in many ways, behaved like one.

The ideology and motivation behind the change may be opaque for years. Analysts suggest that the messianic and apocalyptic side of its jihadist ideology may have gotten the better of the pragmatic impulse that had previously appeared to guide the group’s expansion. Or, experts say, the Islamic State may be seeking to use large terrorist attacks the way a more conventional power might use an air force as a tool of its defence policy, to retaliate against enemy attacks and seek to deter them.

But, if so, its tactics may be shortsighted, causing redoubled Western attempts to crush the militant organization - even as the spreading Islamic State structure makes those efforts more challenging.

The attacks come against a backdrop of signs that the Islamic State’s leaders based in Raqqa, Syria, may have been building closer cooperation with its two most significant affiliates, or “provinces,” in Libya and Egypt.

The main Libyan arm of the Islamic State - known as the Tripoli Province and centred in the midcoastal city of Sirte - has long demonstrated the closest coordination with the group’s Syrian hub. The two operations began advertising their cooperation as early as February with a video of Islamic State fighters beheading at least a dozen Egyptian Christians.

Western intelligence agencies say Islamic State fighters with experience in Syria and Iraq have often turned up in Darnah, a militant stronghold east of Sirte, although the group’s affiliate there was routed earlier this year in a dispute with militant rivals.

The United States broadened its fight against the Islamic State in Libya on Friday night, targeting the group’s senior leader there, the Pentagon said on Saturday. The airstrike took place in Darnah shortly after the attacks in Paris began, but had been in the works for several days and was not related to the events in France, American officials said.

The strike was aimed at Abu Nabil, also known as Wissam Najm Abd Zayd al Zubaydi. He is an Iraqi national who led Qaeda operations in western Iraq from 2004 until 2010. He later moved to eastern Libya to lead Islamic State operations there, the officials said.

Pentagon officials said they believed the strike, first reported by The Daily Beast, had killed Abu Nabil, though it would take a few days to confirm. It marked the first time the United States has targeted a senior Islamic State operative outside Iraq or Syria.

Libyan news media reported last week that a senior Islamic State leader had personally visited Sirte, stirring speculation about the main group’s plans for its local branch. The leader, known as Abu Ali al-Anbari, arrived “by the sea,” the Libyan news network 218TV reported, according to a translation by the SITE Intelligence Group.

Mr. Anbari’s arrival may represent what a senior Pentagon official said were signs that Libya could provide a redoubt for the Islamic State even if the group was driven completely out of Syria and Iraq.

With no functioning government, Libya provides a variety of havens and hiding places for Islamic State militants, so airstrikes or other military action on Sirte would merely push them elsewhere. And unlike Syria and Iraq, Libya is a failed state surrounded by weak ones.

The timing of the explosion aboard the Russian charter jet with the Islamic State attacks in Beirut and Paris is the most visible indication yet that the Sinai Province group may be taking directions from the Islamic State in Syria and Iraq. If the attacks in all three countries were coordinated, some central planners must have been involved.

The plane crash was also at least the second time that the Sinai Province has cited retribution for the Western campaign against the faraway Islamic State - and not domestic Egyptian governance - as a motive for its acts. It cited the same reasoning this August when it released a video in the Islamic State’s trademark style showing the beheading of a Croatian working for a French energy company.