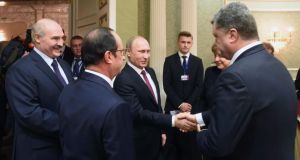 Hopes for a ceasefire in eastern Ukraine hung in the balance last night, as major differences between Kiev and Moscow and the rebels it supports threatened to derail a long–awaited peace summit.

The leaders of Ukraine, Russia, Germany and France met yesterday evening in the Belarusian capital of Minsk, after more fighting in Donetsk region that the US army said involved direct intervention by Moscow’s military.

More than 30 people were killed over the previous 24 hours, in rocket strikes on rebel-held Donetsk city and the government stronghold of Kramatorsk, and around the key rail hub of Debaltseve that has been the epicentre of recent battles.

“The entire world is waiting to see whether the situation moves toward de-escalation, weapons pullback, ceasefire or . . . spins out of control,” Mr Petro Poroshenko said on arrival in Minsk.

The four leaders exchanged tense greetings and handshakes, five months after they met for the first time in Minsk and agreed a ceasefire and peace deal that failed to halt the fighting. More than 5,350 people have been killed in the conflict and more than one million displaced.

Earlier yesterday, Mr Poroshenko said Kiev wanted “an unconditional peace. We demand a ceasefire, a withdrawal of all foreign troops, and closing of the border . . . We will find a compromise within the country.”

Moscow also opposes Ukraine’s demand that it be allowed to retake control of the border between rebel-held territory and Russia, across which fighters and weapons have flowed for months.

“To give away the Russian part of the border also would be to cut them off even from humanitarian help and allow them to be surrounded,” Russian foreign minister Sergei Lavrov said of people in rebel-held territory.

Disagreement could also surround plans for the size of any buffer zone between government and separatist forces, and who monitors it. Before talks began, French foreign minister Laurent Fabius called the Minsk gathering a “last-chance negotiation”.

Germany played down expectations of a major breakthrough, with Chancellor Angela Merkel’s spokesman Steffen Seibert saying the summit offered only a “glimmer of hope, nothing more”: “It is uncertain whether an outcome can be reached, but despite all the uncertainty, it is worth trying in the interest of the suffering people in eastern Ukraine.”

The White House is under domestic pressure to provide arms to Ukraine should the Minsk talks fail, and the EU has threatened to impose tighter sanctions – moves Moscow says will only inflame tension and increase bloodshed.

Mr Poroshenko warned that if no diplomatic breakthrough was made and violence escalated, he would “not hesitate” to “introduce martial law throughout Ukraine”.

Ukrainian troops are in danger of being surrounded at Debaltseve, where Ben Hodges, the US army commander in Europe, claimed Russian military arms are being fired.