Only danger of republishing ‘Mein Kampf’ is risk of paper cut 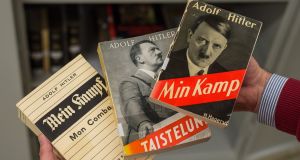 Is finding original Christmas presents a struggle? Have you always found forbidden fruits taste that bit sweeter? If so, we have the perfect gift for you.

Mein Kampf is the meandering tale of a failed painter’s struggle to conquer the world and the German language. Though a failure on both fronts, the author still scored a bestseller and had the last laugh over mean-spirited critics by taking over the country so he could declare tax-free his sizeable royalties.

After decades out of favour the time has come to rediscover this unreadable classic. But hurry: from January the original German edition of Mein Kampf – the only way to read this doorstopper, or wobbly table propper-upper – will lose its forbidden whiff.

Seven decades after the failed artist’s demise, the copyright on Mein Kampf runs out on December 31st. But, with no immediate heirs, who, you ask, has been guarding the deceased author’s copyright since 1945? The Bavarian government in Munich, the late author’s last registered address.

Rather than face claims of profiting from others’ misfortune, the Bavarians kept the book off the market in Germany all these years – until now.

The looming return of Mein Kampf to German bookshelves prompted the rhetorical headline this week in the right-wing Die Welt daily: “How dangerous is Mein Kampf still?” The answer: apart from the risk of paper cuts, not very.

“What’s dangerous is not the miserable German, filled to the brim with hate of almost everything and everyone, but the myth of the book itself,” Die Welt wrote, laying blame for the dangerous myth on the Bavarian ban.

After agreeing to lift the ban and fund a critical edition, the Bavarians’ courage failed them and, after lobbying from Israel and Bavaria’s Jewish community, Munich yanked their funding.

But the Bavarian historians refused to lose this final struggle over Mein Kampf and completed their their two-volume work, priced €59.

For aesthetes who regret the new edition’s drab, porridge-coloured cover, there’s only one alternative: the striking original edition with its angry young man author – complete with hipster moustache – emblazoned on the front cover.

Mein Kampf, available on eBay from €20. A very special Christmas gift for that special someone you loathe.