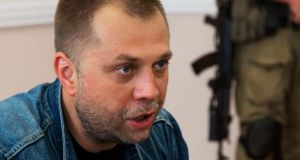 Pro-Russian rebels in eastern Ukraine have refused to allow a train carrying the bodies of victims of last week’s Malaysian Airlines disaster to leave for Kiev-controlled territory, despite growing international condemnation.

The separatists, whom Ukraine’s government and western allies claim are armed by Moscow, said wagons loaded with the remains of about 200 of the 298 victims would only leave Torez in Donetsk region when international investigators had examined them and the plane’s wreckage.

“The bodies will go nowhere until experts arrive,” said Alexander Borodai, a Russian acting as prime minister of the rebel “Donetsk People’s Republic”.

One of his deputies, Andrei Purgin said the experts must be “walking from Kiev” because they were taking so long to visit the site of the disaster, which Ukraine’s government says was caused by rebels striking the Boeing 777 with a surface-to-air missile provided by Russia.

“It was very difficult to get written approval . . . for us to move the bodies . . . to ensure that later they couldn’t say that we savages had left the people in the sun,” Mr Purgin added.

Volodymyr Groysman, a Ukrainian deputy premier, insisted that Kiev was not preventing foreign experts from visiting the crash site, but underlined that the government “cannot officially provide security guarantees on the territory which is controlled by the fighters”.

An unnamed senior official at the International Civil Aviation Organisation told Reuters news agency last night that two investigators now in Ukraine could not reach the site of the crash or examine its “black box” flight recorders.

“Nobody has been allowed to have access to the site for that purpose . . . Until safe passage for them is assured, we don’t send people into that kind of situation,” the official said.

Mr Borodai said the separatists, who want eastern Ukraine to join Russia, had found “some technical parts” of the Boeing 777 that they “assume are black boxes”.

“We do not have aviation experts and that is why we cannot state precisely that this is what they are. Those parts have been delivered to Donetsk and they are under my control. We are waiting for experts to whom we can pass them on.”

Amid growing international criticism of the rebels and their alleged Russian backers, US secretary of state John Kerry said the handling of the plane disaster was more evidence that Kremlin leader Vladimir Putin was not sticking to a pledge to use his influence on the militants to de-escalate Ukraine’s crisis.

“Drunken separatists have been piling bodies into trucks and removing them from the site . . . What’s happening is really grotesque and it is contrary to everything President Putin and Russia said they would do,” Mr Kerry said.

“The fact that the separatists are controlling this in a way that is preventing people from getting there, even as the site is tampered with, makes its own statement about culpability and responsibility.”

“We must turn this moment of outrage into a moment of action,” he said. “If President Putin does not change his approach to Ukraine, then Europe and the West must fundamentally change our approach to Russia.”