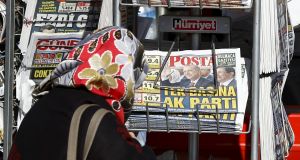 A woman looks at newspapers at a kiosk in Istanbul, Turkey, saying ‘AK Party on its own’ after president Tayyip Erdogan’s party won almost 50 per cent of the vote in a snap election. Photograph: Osman Orsal/Reuters.

The campaign for Turkey’s parliamentary elections, which saw the ruling AK Party win back a majority on Sunday, was unfair and marred by fear and violence, international election observers said on Monday.

The AK Party, founded by president Tayyip Erdogan, won close to 50 per cent of the snap vote according to unofficial results, following widespread violence in the mainly Kurdish southeast and a crackdown on media critical of the government.

The heads of the joint mission from the Council of Europe and the Organisation for Security and Co-operation in Europe (OSCE) said at a news conference the violence had a significant impact.

They pointed to attacks and intimidation against members of the pro-Kurdish HDP, which saw its support drop 2 per cent compared with June polls.

“Unfortunately we come to the conclusion that this campaign was unfair, and was characterised by too much violence and fear,” said Andreas Gross, a Swiss parliamentarian and head of the Parliamentary Assembly of the Council of Europe delegation.

Observers praised the high voter turnout but criticised what they said was biased coverage by the national broadcaster, TRT, and a deteriorating environment for journalists.

“It is ... vital that the president works towards a more inclusive process ... he has to unite again what has been divided in the last five months,” Mr Gross added.

So far no parties have lodged formal complaints over the results, although the HDP said it was planning to contest several seats. Official results are not expected for another 11 days, in order to allow time for complaints to be assessed.

The AKP lost its majority in June polls. Voters this time appeared to choose stability after months of political uncertainty, a surge in violence between the army and Kurdish militants and two bombings linked to Islamic State which killed more than 130 people.

Mr Erdogan had urged voters to restore the country to single-party rule to maintain security. His critics accused him of deliberately creating chaos to frighten disaffected supporters.

Turkey’s relations with the EU have soured in recent years amid accusations that human rights have been eroded under Mr Erdogan.