Obama says sending ground troops to Syria would be a mistake 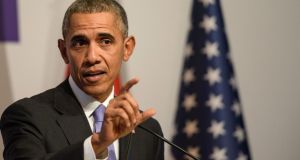 G20 leaders meeting in Turkey vowed to intensify efforts to fight terrorism including targeting the funding channels behind extremist organisations, but US president Barack Obama ruled out employing ground troops in Syria to fight Islamic State. Speaking at the end of the two-day summit in Antalya, the US president said that while the terrorist attacks in Paris on Friday were a setback in the fight against jihadism, putting US troops on the ground in Syria “would be a mistake.”

“We are going to continue the strategy that has the best chance of working,” Obama told a news conference.

“This is not a traditional military opponent. We can retake territory and as long as we keep our troops there we can hold it.

“But that does not solve the underlying problem of eliminating the dynamics that are producing these kinds of violent, extremist groups,” he added.

As EU foreign ministers met in Brussels, French President François Hollande called for a strengthening of the European Union’s external borders. He also invoked Article 42.7 of the EU treaty, which states that all EU countries have “an obligation of aid and assistance by all the means in their power” to any member that is the victim of armed aggression, though he avoided any reference to Nato’s Article 5 collective defence clause which states that an attack on one Nato member is an attack on all.

With EU justice ministers due in Brussels on Friday for an emergency meeting in the wake of the Paris attacks, focus is now turning to the EU’s internal borders system.

Reports that Salah Abdelsalam, the 26-year-old Belgian-born man who is the subject of an international manhunt, was stopped by police crossing the French-Belgian border after Friday night’s attacks have prompted criticism of the EU’s Schengen system, a fulcrum of EU policy which allows people to pass through a core group of EU and some non-EU countries without having to show a passport.

Speaking in Brussels yesterday, Minister for Foreign Affairs Charlie Flanagan said that a “small number” of people were being monitored by security forces in Ireland in the wake of the Paris attacks.