Summit to be dominated by Russia’s involvement in Ukraine crisis 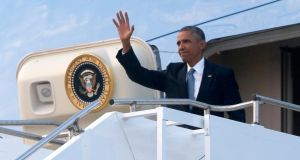 President Barack Obama waves as he arrives on Air Force One to attend the NATO Summit in Wales. Photograph: AP Photo/Charles Dharapak

US president Barack Obama arrived in Newport, South Wales, late last night for one of the most urgent meetings of Nato leaders in the organisation’s history.

Almost 4,000 delegates have travelled to Wales for the two-day summit in the Celtic Manor hotel outside Newport, prompting one of the biggest security operations seen in Britain for years.

The summit will be dominated by Russia’s involvement in the Ukraine crisis, but also by the threat posed by Islamic terrorists in Syria, Iraq, Lebanon and Afghanistan.

Meanwhile, Minister for Defence Simon Coveney will travel to Wales today to attend an afternoon meeting of Nato’s Partnership for Peace group.

On the eve of the gathering, French president François Hollande ordered a halt on the delivery of the first of two warships being constructed for the Russians in a French shipyard. Russia’s actions “contravened the basis of security in Europe”, the French government said, though the €1.2 billion order has been put on hold rather than cancelled.

The French had come under increasing pressure to stop the supply of the Mistral helicopter assault ships given Russia’s invasion-by-stealth of the Ukraine.

Ukrainian president Petro Poroshenko retreated from an earlier claim that he and Russian president Vladimir Putin had agreed a permanent ceasefire in eastern Ukraine.

The declaration from Kiev prompted a quick response from Moscow, who said Mr Putin had not agreed, and could not agree, ceasefire terms because Russia “is not part of the conflict”.

Mr Obama, speaking in the capital Tallinn, vowed that Nato would protect Estonia, Lithuania and Latvia from Russia. Referring to the 1939 invasion by Moscow, which was then allied with Nazi Germany, the US president said: “You lost your independence once before. With Nato, you’ll never lose it again.”

Today, Nato leaders will discuss Afghanistan. Tomorrow, they will turn to plans for a 4,000-strong force that could be deployed within 48 hours – a plan that has provoked fury in Moscow.