More than 4,000 migrants arrive in Slovenia after Hungary closes its southern border 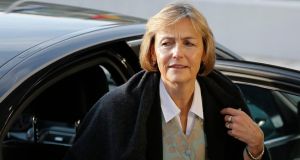 Croatian foreign minister Vesna Pusic: “Slovenia will not close its border unless Germany closes its border, in that case Croatia will have to do the same.” Photograph: Julien Warnand/EPA

A new route for migrants moving through the Balkans towards western Europe is already under strain, with numbers growing rapidly on the Serbia-Croatia border as Slovenia strictly limits the flow of people crossing its territory.

More than 4,000 migrants have arrived in Slovenia from Croatia since Hungary closed its southern border at midnight on Friday, forcing them to reroute west, just as they did in September when Hungary sealed its frontier with Serbia.

The Hungarian government also imposed checks at the border with Slovenia on Saturday, ensuring the migrants could not enter via another route, and leaving Slovenia only the option of transporting them to the Austrian frontier.

Transport by bus and train across Croatia to Slovenia proceeded smoothly all weekend, but pressure was building on Sunday night on the border between Serbia and Croatia, where migrants in dozens of buses were waiting for permission to cross. Scuffles were reported as Croatian riot police blocked the path of hundreds of migrants seeking to enter the country, many of them from Syria, Iraq, Afghanistan and other conflict zones.

“Croatia asked us to accept 5,000 migrants per day, but Austria told us they can accept at maximum 1,500 . . . We cannot accept unlimited numbers of migrants if we know that they cannot continue their journey,” said Bostjan Sefic, state secretary at Slovenia’s interior ministry.

“We insist on balancing inflows and outflows of migrants on a daily basis . . . and for now we will not change that decision,” he said.

With 5,000 or more asylum seekers arriving by boat from Turkey each day in Greece, and then moving north through Macedonia and Serbia to Croatia, there is no sign of the pressure easing as people rush to reach Europe before winter sets in.

Croatia is under huge pressure from the influx of migrants, with Serbia doing little or nothing to moderate the flow of new arrivals, the Hungarian border blocked, and Slovenia insisting on strict control over numbers.

With a general election looming on November 8th, Croatia’s centre-left government also faces a major political challenge to handle the crisis smoothly, with the right-wing opposition party leading in the polls and urging a tougher line on the issue, and Serbia and Hungary sharply criticising Zagreb in recent weeks.

The key to keeping migrants moving lies with Germany, where the vast majority are heading; Balkan states also demand that Greece do more to control numbers.

“Slovenia will not close its border unless Germany closes its border, in that case Croatia will have to do the same,” said Croatian foreign minister Vesna Pusic.