Most fleeing to Europe are ‘not refugees’, EU official says 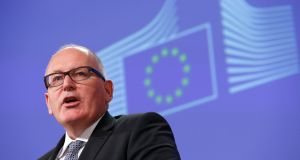 More than half of those fleeing to Europe from the Middle East and Africa are economic migrants and not asylum seekers fleeing the horrors of war in Iraq or Syria, according to first vice-president of the European Commission, Frans Timmermans.

Quoting what he said were new, unpublished, figures from the EU border agency, Frontex, Mr Timmermans said: “More than half of the people now coming to Europe come from countries where you can assume they have no reason whatsoever to ask for refugee status … more than half, 60 percent.”

Those 60 percent were predominantly from north Africa, mainly Moroccans or Tunisians who were leaving their own countries for “economic reasons” and attempting to travel to Europe through Turkey, the former Netherlands foreign minister told the Dutch national broadcaster, NOS.

If the figures used by Mr Timmermans are correct, they could change the complexion of the political debate over how many migrants EU countries are expected to resettle, though there remains the problem that any migrant who reaches European soil is difficult to repatriate.

Acknowledging this, the only immediate option, Mr Timmermans said, was to return economic migrants to their countries of origin as quickly as possible in order to maintain support for refugee relief – in other words, for people genuinely fleeing war.

However, Mr Timmermans – who warned before Christmas that he was concerned about the future of the European Union – rejected border closures, even temporary ones, as “an enormous risk”.

“There is no proof that bringing back border controls will help to ease the situation in terms of reducing the number of refugees”, he warned. “And the reality is that it could do substantial economic damage.”

The influx of migrants has led to concerns in the Netherlands that they could conceal the arrival of Islamist militants intent on attacking soft targets.

The national police said yesterday that heavily armed officers would soon be able, in particular circumstances, to patrol city streets and places such as shopping centres and railway stations carrying submachine guns – a first in Dutch policing history.

It’s understood that some of these officers are part of the security detail protecting the former maritime museum in Amsterdam, the location of a series of top-level meetings during the Netherlands’ six-month EU presidency, the first of them yesterday.

“People may be shocked to see these officers, but the aim is to make the country safer for everyone”, a police spokesman said. “We live in different times.”