Molenbeek residents reeling as stigma of terrorism devastates the neighbourhood 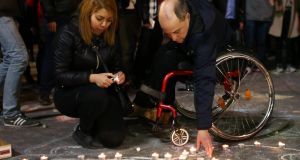 Bilal Benzema (21), a student, lives near the grey-fronted house in Molenbeek where Salah Abdeslam (26), the key suspect in November’s Paris terrorist attacks, was finally cornered by police last Friday.

Benzema could not believe that just as Abdeslam began his third day in isolation in a high-security prison near Bruges, a series of bombs were unleashed on Brussels, killing at least 34 and wounding over 200.

“I’m so shocked, it’s terrible. I was standing here at the police line watching when they caught him.

“It has been like a bad film here for the past two months. There have been so many police here. People were stunned that Abdeslam was hiding here. People thought he’d be in Syria, or Holland, far away but not in Belgium.”

Amid the red-brick terraces on the poorer streets of the mixed Brussels neighbourhood labelled a recruitment base for certain Belgian-born jihadis, the streets of Molenbeek were calm and quiet yesterday. But the mood was grim.

As a police helicopter hovering over Brussels seemed to edge closer, a Muslim mother of four queuing at a corner shop said: “These attacks are horrific. My 16-year-old nephew would normally take the metro at that time. Everyone in Belgium, no matter what their religion or roots, has been targeted in this attack. We’re panicked here. I really hope we are not stigmatised for being ordinary law-abiding Muslims.”

In Molenbeek – as across the country – questions were being asked about home-grown terrorism. As the full identity of the attackers remained unknown, apart from a grainy CCTV image circulated by police, it was not clear whether young men who were born and grew up in Belgium might have been involved in turning arms on their own country, or whether foreign fighters had used Brussels as a base to carry out the attacks.

Belgium has seen the highest proportion of jihadi fighters leaving for Syria per head of the population of any country in western Europe, and has had to deal with the problem of their battle-hardened return.

But the poorer streets of Molenbeek, a focus of high unemployment and criminal gangs seen as fertile recruiting ground, are by no means the only neighbourhood that has seen local youths join Islamic State (Isis).

The key question now is how a terror cell was able to bomb Brussels under the noses of the police and intelligence services who had been carrying out a vast operation on jihadi hideouts in different Brussels neighbourhoods in recent days.

The fact that these bombings took place just as the police were mobilised in the hunt for Abdeslam’s accomplices indicates the potential scale of a terrorist network that the French president, Francois Hollande, said last week was “more numerous than we had thought”.

There will now be a renewed focus on the clues found in an earlier raid a week ago in a flat in the quiet southwestern area of Forest.

Police arrived to search that flat believing it was empty, with the electricity and water turned off, but instead found several people heavily armed and shooting at them from behind the door, apparently prepared to die.

A police sniper shot dead a man as he threatened to shoot from the window, Mohamed Belkaid, a 35-year-old Algerian and suspect in the Paris attacks.

“Next to his body was a Kalashnikov, a book on Salafism and an Islamic State flag,” the Belgian federal prosecutor’s office said. It later emerged Abdeslam had also been at the flat.

Crucially, a substantial amount of ammunition was found at the Forest flat – including kalashnikovs, 11 chargers and detonators.

“Foreign fighters with weapons in a house, it’s clear that they weren’t here for a picnic,” the Belgian prosecutor Frederic Van Leeuw said at press conference on Monday.

Several key suspects in the Paris attacks are still on the run despite an international manhunt. Najim Laachraoui (24), whose nationality has not been given, was identified this week as a key suspect previously known by his alias Soufiane Kayal.

He is reported to have travelled to Syria in 2013, and was travelling with Abdeslam under his alias in September 2015 when their car was stopped at the Hungarian border with Austria.

Also still being hunted is Mohamed Abrini (31), a Belgian of Moroccan origin, was described on his international arrest warrant four months ago as “dangerous and probably armed”.

He is a childhood friend of Abdeslam – their families used to be neighbours in Molenbeek. He disappeared after allegedly playing a key part in the planning and logistics of the attacks.

Two other brothers, Khalid and Ibrahim el-Bakraoui, are also being hunted, suspected of hiring properties as hideouts for the Paris terrorist team.

In Molenbeek, the fact that the Brussels attacks happened so soon after Abdeslam’s arrest has increased the shock.

“After the relief at Salah Abdeslam’s arrest, people expected a kind of let-up,” Sarah Turine, the Green deputy mayor of Molenbeek told the Guardian. “But we realise now that Abdeslam was not the last of the cell. He might be the end of the Paris attacks network but they [Isis] have many cells and networks not just one.”

She said there had been a sense that anything could happen at any moment. “But we didn’t think something would happen so close to the arrest.”

Turine warned against stigmatising any community. She said of the terrorist attackers: “They want to divide us, we have to stand united. We must all unite in the fight against terrorism.”– (Guardian service)