Moldovans march again and call for government to resign 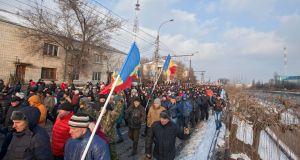 A protest outside the national television building in Chisinau, Moldova, against the new government headed by pro-European Pavel Filip. Photograph: Dumitru Doru/EPA

Opposition leaders in Moldova vowed to continue street protests until the controversial new government resigns and snap elections are called.

Thousands of people marched through the capital Chisinau on Friday. It was the third day of demonstrations against a cabinet hastily approved by deputies and secretly sworn in on Wednesday night, when protesters briefly forced their way into parliament.

New prime minister Pavel Filip and his cabinet insist they took power legitimately, however, and have called for calm on the streets and talks with opposition leaders, while flatly rejecting demands to step down and hold elections. The EU and United States have also called for dialogue, while refraining from statements of strong support for the government – which calls itself pro-western – or the protesters, which include a strong pro-Russian element.

The Kremlin said on Friday that Russian president Vladimir Putin and his security council discussed the situation in Moldova, a country of 3.5 million people beside Ukraine which has long been tugged between Moscow and Brussels.

About 3,000 protesters marched through Chisinau, from outside parliament to the headquarters of the state broadcaster, and then to the defence ministry. Police kept close watch but the rally was peaceful during the day.

“We are not leaving here – either we win, or we die,” Andrei Nastase, leader of the pro-EU Dignity and Truth movement, told demonstrators. Along with pro-Russian party leaders Igor Dodon and Renato Usatii, Mr Nastase called on television bosses to give the opposition guaranteed airtime every day, to break what they call a media blockade by outlets owned by tycoons. Foremost among Moldova’s oligarchs is Vlad Plahotniuc, a billionaire who controls several broadcasters and is a close ally of Mr Filip.

The theft triggered a financial crisis and delayed the start of a new International Monetary Fund programme and budgetary support from the EU and the World Bank.

The government insists it will find the money and thieves, stabilise the country and reinvigorate its EU integration drive. Opposition leaders are calling for a huge rally on Sunday, however.

“Moldova has united – everyone come to the protest on Sunday,” Mr Dodon declared on national television. “We are all against the illegal power of oligarchs. All Moldovans – come!”