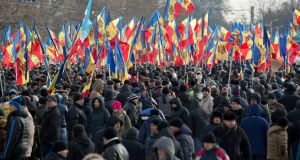 Moldova’s opposition is planning new demonstrations after an ultimatum to the government expired yesterday evening, amid warnings that the protests could lead to violence and calls for European mediation to defuse a growing crisis.

The government ignored opposition demands to resign and call snap elections, and rejected criticism of how it took power last week, with a hurried vote of approval from deputies and a secret swearing-in ceremony in the dead of night.

A key role in forming the new ruling coalition was played by Moldova’s richest “oligarch”, Vlad Plahotniuc, and critics claim he will control a government that is under domestic and international pressure to fight rampant corruption.

Europe’s poorest nation suffered the unexplained theft of $1 billion (€910 million) from three banks in 2014, and a state bailout of the stricken lenders weakened the currency and drove up prices in a country where the average monthly wage is barely €200.

Mr Dodon declined an invitation to meet speaker of parliament Andrian Candu tomorrow, but asked him – as a leading figure in the ruling coalition – to come to a meeting of opposition leaders tomorrow if he had proposals to make.

That “civic forum” would decide what action to take next, Mr Dodon said.

“Of course there will be actions, and they will be very clear and coherent. We are not prepared to give up,” he said.

At a rally of more than 15,000 people in Moldova’s capital, Chisinau, last Sunday, opposition leaders threatened to intensify protests and block major roads, rail lines and even the airport unless the government stepped down.

In a country of about 3 million people, long pulled between Russia and the West, the protests have united Moldovans in demanding an end to opaque rule by a tiny elite of politicians and businessmen.

Some Moldovans fear the rallies could spark violence, however, and several people were hurt last Wednesday when protesters forced their way into parliament.

“The protest could easily get out of control,” pro-Moscow politician Renato Usatii told Russian media.

“The number of disaffected is growing. There are more people at every protest. People are at the limit of their anger . . . I wouldn’t be surprised if one day everyone got together and went to storm parliament or government headquarters.

“We don’t plan any such seizures, but street protests will continue, and there will be acts of civil disobedience at the local level.”

Maia Sandu, a former education minister and probably Moldova’s most popular pro-EU politician, is not taking part in protests that she warned “could turn violent.”

“To avoid this, all parties should get to the table and hold dialogue,” she said.

“A mediator, like the Council of Europe, should sit in these meetings and help find a reasonable solution.”