#JesuisCharlie: journalists stand in solidarity with victims of attack on satirical magazine 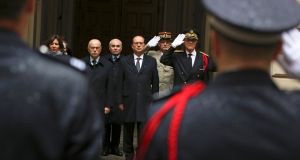 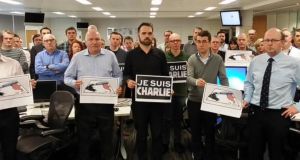 Journalists in the newsroom at The Irish Times observing a minute’s silence at 11am to mark the killings at Charlie Hebdo in Paris. Photograph: Frank Miller/The Irish Times

Thousands across the world observed a minute of silence at midday to honour those killed in yesterday’s terrorist attack on the Paris office of satirical magazine Charlie Hebdo.

Crowds gathered in central Paris to participate with many carrying posters declaring Je Suis Charlie (I Am Charlie) in support of the newspaper.

The attack has been widely condemned as an assault on the principle of freedom of speech and journalists and newsrooms across the world joined in to mark the minute’s silence.

The National Union of Journalists called its members in Ireland to join the planned minute’s silence as a gesture of solidarity with French colleagues.

The call was supported by the Irish Congress of Trade Unions.

NUJ Irish secretary Séamus Dooley said there was public revulsion at what had happened in Paris yesterday. “We stand with the people of France but especially with the families of those who were killed because of their profession, as journalists and guardians of the peace.

French president Francois Hollande ordered flags at half-mast to honour the victims of the attack on Charlie Hebdo, which had caricatured the Prophet Mohammed.

A minute of silence was also observed this afternoon at the French Embassy in Dublin. A book of condolences will remain open to the public at the embassy (36 Ailesbury Road) until 5pm today and again from 10am to 5pm tomorrow.

The Residence and the Embassy will fly their flags half-mast until Saturday.

Those who died are:

Stéphane Charbonnier had been editor of Charlie Hebdo since 2009 and led the paper’s charge against the taboo of depicting the prophet Muhammad, in the name of freedom of expression.

Jean Cabut, aka Cabu (75) One of France’s best-known cartoonists, Cabut published many popular comic books in the 1970s and ’80s.

Georges Wolinski (80) The cartoonist Wolinski was a pillar of the French satirical world and had a long association with Charlie Hebdo, having been editor between 1970 and 1981.

Mustapha Ourrad, listed as a proof-reader

Bernard Verlhac, aka Tignous (58) A prolific cartoonist whose work was published in satirical magazines including Charlie Hebdo and the Franco-Belgian comic magazine Fluide Glacial, as well as French news magazines.

Elsa Cayat, psychoanalyst and columnist, was the only woman to be killed in the attack.

Bernard Maris (68) Maris was an economist and journalist who wrote the weekly “Uncle Bernard” column in Charlie Hebdo.

Michel Renaud who was reportedly visiting the offices as the time of the attack.