‘Winter is coming, shelter and places of safety must urgently be provided’ - MSF director 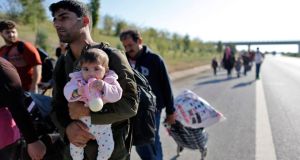 Syrian refugees walk along the Istanbul-Edirne highway in an attempt to cross the Turkish-Greek border in Edirne, a city in the west of Turkey. Photograph: Cem Turkel/EPA

Aid agencies have criticised European ministers for failing to reach an agreement on a relocation scheme for refugees, calling on the EU to replace smugglers with safe and legal alternatives.

She said EU discussions needed to move away from focusing on quotas, protecting borders and building triage centres, and focus on the humanity of the men, women and children fleeing war and persecution.

“EU ministers focus on numbers but they forget that people arriving into EU countries are not numbers; they are people with human needs of water, food, shelter, medical care and protection,” said Ms McKenna. “These are needs that must urgently be met.”

Member states failed on Monday night to back the plan proposed by the European Commission last week to relocate 120,000 refugees following significant opposition from a number of central and east European countries to the idea of mandatory quotas.

EU representatives signed off to an earlier plan announced by the commission in May to accept 40,000 asylum seekers from Syria and Eritrea and agreed to revisit the issue on October 8th.

“Winter is coming, shelter and places of safety must urgently be provided along migratory routes and upon arrival,” said Ms McKenna. “Even if the much more ambitious relocation mechanism as proposed by the commission is accepted, people still have no choice but to risk their lives to reach Europe.

“The primary focus should be to protect and save lives. There is no more time to lose,” she said.

Iverna McGowan of Amnesty International described as “piecemeal” the measures implemented at Monday’s meeting of justice ministers in Brussels.

She said: “Inadequate implementation aside, relocation is not a sustainable solution to help asylum seekers and refugees.

“The gravity of the situation in the countries of first arrival can best be prevented by access to the wider EU through safe and legal routes and the mutual recognition of refugee status. We need a complete rethink of the EU’s approach to asylum, not new barriers and yet more squabbling over quotas.”

The Irish Human Rights and Equality Commission welcomed the Irish Government’s decision to accept up to 4,000 people and the establishment of a cross-departmental taskforce to coordinate the resettlement programme.

Chief commissioner Emily Logan said it was important to ensure reception centres around the State were of a standard that would “protect the dignity of refugees, and facilitate long term integration and recovery of individuals, many of whom will be traumatised by the experience of recent months”.

Ms Logan said the new refugee programme being established would offer the opportunity to fast-track people already living in direct provision centres for more than 5 years.

“The granting of international protection is a fundamental part of ensuring a humane system that complies with human rights protections for people who are subject to persecution or other serious harms in their countries of origin,” said Ms Logan. “It is important that the International Protection Bill promised by the Government is enacted at the earliest opportunity.”

Sue Conlon of the Irish Refugee Council warned last week that refugees accepted into Ireland were are risk of ending up in direct provision centres, saying former military barracks were not suitable for housing new arrivals.