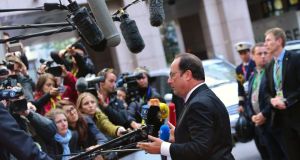 At a summit overshadowed by tensions between member states following the approval of a controversial quota scheme for refugees on Tuesday, European Council president Donald Tusk attempted to reassure countries the EU would help frontline member states protect their borders.

“The most urgent question we should ask ourselves tonight is how to regain control of our external borders.

“Otherwise it doesn’t make any sense to even speak about a common European migration policy,” he said ahead of the meeting.

Among the ideas under consideration last night was a pan-European border guard, a proposal that would be a significant departure from current EU policy as border protection is generally the preserve of member states.

Taoiseach Enda Kenny said he expected leaders to discuss humanitarian efforts to tackle the crisis, such as increased resources for the World Food Programme and the UN’s refugee agency, as well as assisting Balkan countries struggling to deal with thousands of refugees.

Expressing hope the meeting “would not deteriorate into the wrong kind of argument”, he warned the refugee crisis had the potential to divide Europe.

“If this is not handled properly, it actually has the potential to divide Europe between old and new.”

Yesterday’s meeting took place amid continuing divisions between member states on how to respond to a crisis that has seen thousands of refugees enter the EU from the Middle East and north Africa.

Following the decision by four EU countries to vote against the EU’s refugee quota programme, Slovakia’s prime minister threatened to refer the proposal to the European Court of Justice.

But the Czech Republic, Poland and Romania indicated they would comply, albeit reluctantly.

Under the proposal, member states can face fines for non-compliance with the proposal to distribute refugees across the EU.

Arriving at the summit, Hungarian prime minister Viktor Orban, whose country is at the centre of the crisis, called for greater support for Greece.

“If the Greeks are not able to defend their own border, we should ask kindly, because Greece is a sovereign country: let the other countries of the European Union defend the Greek border,” he said.

Hungary has argued the Turkish-Greek border is a key transit country, and wants the EU to focus resources there.

Earlier, speaking at the Christian Social Union (CSU) conference in Bavaria, Mr Orban warned against “moral imperialism”, saying this country had a “democratic right” to a different approach.

“We are Hungarians, however, we cannot think with German minds. Hungary should have the right to control the impact of a mass migration. The Hungarian people don’t want this, we ask that the wishes of Hungarians be respected.”

Meanwhile, ahead of the meeting, the European Commission urged member states to increase funding for Syria, Africa and for the World Food Programme.