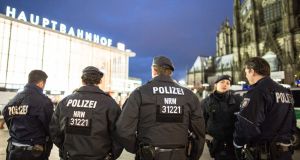 Police officers stand outside the main station in Cologne, Germany, on Wednesday. After sexual assaults on women on New Year’s Eve, there is an increased police presence at the main station. Photograph: Maja Hitij/EPA

Chancellor Angela Merkel has responded to the “abominable” sexual assaults in Cologne on New Year’s Eve by promising a review of procedures for expedited expulsion of criminal non-nationals.

A week after groups of men attacked, robbed and molested women in Cologne, the number of complaints has topped 120, including two claims of rape.

With similar criminal complaints filed by women in Hamburg, Stuttgart and Berlin, the German leader insisted on Thursday the state would respond appropriately “whether it requires legal changes or [greater] police presence”.

“The feeling of being completely vulnerable – in this case, women – is for me personally unacceptable,” said Dr Merkel. “And so it’s important that everything that happened is put on the table”.

After Germany accepted more than one million asylum seekers last year, Dr Merkel’s words on Thursday mark a drastic shift in tone from her “we can do this” maxim from last August.

Under pressure from her own party, her Bavarian allies and her hard-line interior minister, Thomas de Maizière, Dr Merkel said the time had come to “see if we have done everything necessary to send a clear signal to those who are not interested in accepting our legal system”.

Her intervention is an attempt at damage limitation as extreme right groups exploit the attacks to step up their protests against migration and warnings about criminal asylum seekers.

It took several days for Mr Albers to admit the scale of the events. He also denied having any information on the perpetrators or their origins and insisted his force had not been overwhelmed.

Reports leaked on Thursday paint a very different, chaotic picture: of police officers struggling to cope with about 1,000 drunken men who launched fireworks, then surrounded, robbed and groped women around the central train station.

In the leaked reports police contradicted their own chief on Thursday, saying they had recorded the details of 71 people, taken another 11 into custody and arrested four. “The vast majority of the persons whose details were taken could only identify themselves with a registration document as an asylum seeker,” said one report, leaked to Cologne’s Express newspaper.

Days after Cologne officials denied that asylum seekers were involved in the attacks, another unnamed police officer told Die Welt daily that only a small minority of those involved were of north African origin. “The vast majority of those whose papers were checked were Syrians,” said the unnamed officer.  In a separate report, a police officer recalled a man telling him: “You have to treat me well, I am Syrian. I was invited here by Mrs Merkel.”

In the same report, a man reportedly tore up his asylum papers in front of a police officer, though it cannot be confirmed if it was a real document.

Dozens of women have filed charges in Cologne – including two rape charges – after being grabbed and groped by men. “Women ... had to literally run the gauntlet through masses of heavily intoxicated men, something one cannot describe,” wrote one officer, describing the events as “chaotic and shameful”.  “It was not possible to get a handle on all the events, attacks and crimes, there was simply too much at once.” Cologne police say that, based on security footage from the night, they have 16 suspects in their sights, though they have not yet been identified.

On Wednesday evening, a Cologne man shut down a Facebook page he set up after the attacks, saying it had become a “warzone for verbal violence ... calls for lynch justice, insults, rabble, agitation and racism”. Meanwhile on Twitter a smiling Lutz Bachmann, head of the far-right Pegida group, unveiled a new t-shirt on Thursday carrying the slogan: “Rapefugees not welcome”.