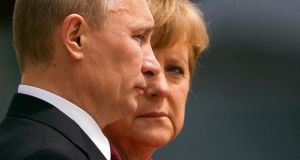 German chancellor Angela Merkel with Russian president Vladimir Putin in 2012. During a weekend of telephone diplomacy, Merkel told Putin he had “breached international law with his unacceptable intervention in the Crimea”. Photograph: Reuters/Thomas Peter

For the 14 years they have known each other, Angela Merkel and Vladimir Putin have gotten on like cat and dog. Their public remarks strain the limits of diplomacy, their private phone conversations are blunt.

Yet on this prickly, imperfect relationship hinges the outcome of the Ukraine stand-off.

During a weekend of telephone diplomacy, Merkel told Putin he had “breached international law with his unacceptable intervention in the Crimea”.

Her officials deny Berlin’s strategy is about appeasing Russia, supplier of a third of German energy. They bristle at US claims that the Crimean crisis is another chapter of Berlin fence-sitting, like its infamous 2011 abstention from a UN vote on military action in Libya.

White House spin
In public Merkel officials refuse to comment on White House spin of her weekend remark to Obama that the Russian leader was “in another world”.

Privately, though, they are livid, insisting Merkel does not view the Russian president as deluded, just operating in a different reality.

Putin and Merkel know each other’s realities better than most. Among Putin’s happiest memories are his spell as a KGB agent in 1980s Dresden; Merkel was such a good Russian student in East Germany that she won a trip to Moscow in 1969. After their first meeting in 2000, Merkel joked she had passed the KGB test by successfully holding Putin’s gaze.

Today the German leader finds herself translating on the fly between Washington and Moscow. While Russia rattles the chains on Crimea, and the US reacts with sanction threats, Berlin has proposed a fact-finding mission to examine claims and counterclaims in the Ukrainian conflict.

Fearful of the diplomatic lines going dead, Germany has also flagged, and Putin accepted, a contact group between all capitals.

Helping shape Berlin strategy is Social Democrat foreign minister Frank Walter Steinmeier. While his former boss Gerhard Schröder memorably described Putin as a “flawless democrat”, Steinmeier is of another view. He does not view diplomacy as an end in itself, and last month warned his fellow citizens that “Germany is too big to just sit on the sidelines and comment on world politics”.

Move first
For now Germany believes isolating Russia will be less effective than turning Putin’s energy back on himself. On Ukraine that means forcing him to move first – the classic Zugzwang strategy in chess – in the hope he will back down.

The strategy may yet fail but Germany has something others don’t have in a stand-off with Russia: public credibility and Putin’s ear. While just 3 per cent of Russians respect Obama, a 2012 poll indicated one in five respect Merkel.

The last German woman to make such an impression on Russia, and whose portrait Merkel keeps on her desk, was Catherine the Great – the woman who took Crimea from the Ottoman Empire.