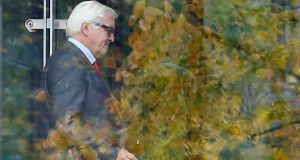 As she pushes deeper European integration, her likely third-term coalition partners, the Social Democratic Party (SPD), voted yesterday to commence talks with her Christian Democratic Union (CDU). About 85 per cent of more than 200 SPD delegates meeting in Berlin yesterday backed party leaders to open talks for a second grand coalition with the CDU.

SPD leaders have insisted their key election promise of a statutory minimum wage of €8.50 will be in a final agreement. However the party appears to have backed away from promises of tax hikes for top earners, a no-go with the CDU, before talks begin on Wednesday.

Outside the conference in Berlin, a group of protesting rank-and-file members played bongos and waved banners reading: “With Merkel there will be no political change.”

Inside, SPD leader Sigmar Gabriel reminded journalists that SPD members will be asked to vote on the final coalition agreement.

“We are living in times when you cannot force anything on your members any more,” he said. “Of course irreconcilable differences could arise that make a coalition impossible, but if you start coalition talks you have to work to the possibility of a successful conclusion.”

Mentally there
Mr Sascha Vogt, an SPD regional official from the eastern city of Halle, said: “Emotionally, the rank-and-file are against a grand coalition but, in our heads, we have agreed to talk.”

According to Der Spiegel Berlin wants to move ahead with so-called “contractual arrangements”, presented by the commission last March to allow it to enforce government to meet commitments on fiscal savings, economic competitiveness measures and investment.

In return for making binding commitments, the member state would be entitled to draw down funds from a supplementary pot only open to contractual arrangement signatories. Berlin’s reform efforts foresee transforming the euro group head into a full-time euro zone finance minister.

Germany’s wish for such a carrot-and-stick approach is not new and, to date, has always come up against opposition from other member states, not least Ireland which would have to put any treaty changes to a referendum.

Other member states are worried at the prospect of opening the treaty at a time of popular unrest towards Brussels and its institutions, with populist and Eurosceptic parties on the rise.

In recent months, though, Berlin has insisted treaty change will be unavoidable to provide a sound legal footing for EU measures to wind up failing banks, part of the so-called banking union.

Berlin’s plan is still medium rather than short-term. Dr Merkel wants to wait until after next year’s European election to progress the measures.