Mark Rutte to meet Enda Kenny in Dublin for talks 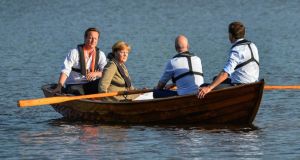 Dutch prime minister Mark Rutte flies to Dublin today for talks with Taoiseach Enda Kenny on the appointment of the next European Commission president, as British prime minister David Cameron continued his campaign against Jean-Claude Juncker’s candidacy in Sweden.

Mr Cameron met his Dutch, Swedish, and German counterpart in the Swedish prime minister’s country residence in Harpsund, just outside Stockholm, yesterday evening with talks scheduled to continue this morning.

Arriving in Harpsund, Mr Cameron said EU member states, and not the parliament, should select the candidate. “We should be the ones to choose who should run these institutions, rather than accept some new process that was never agreed,” he said.

But German chancellor Angela Merkel has publicly backed Mr Juncker as lead candidate. Sources in Berlin stressed her priority was to keep Britain in the EU.

Mr Rutte is scheduled to hold talks with Mr Kenny over dinner this evening at Government Buildings. Neither Mr Rutte nor Mr Cameron are part of the European People’s Party (EPP) group which nominated Mr Juncker as president at a convention in Dublin in March. Mr Cameron’s Conservative Party left the EPP in 2009, while Mr Rutte’s Liberal party belongs to ALDE, the thirdlargest political group in the parliament.

Meanwhile, EU sources in Brussels strongly rejected suggestions Mr Juncker would withdraw from the process, describing reports he could abandon his quest to become commission president as rumours “without any foundations”.

“It’s incredibly important we preserve the integrity, the authority and independence of the European Commission,” the leader of the Liberal Democrats said. “We mustn’t establish the precedent that the European Union commission president is hand-picked by the parliament.”

A former European Commission official and MEP, Mr Clegg is normally at odds with his coalition partner on EU matters.

Managing director of the International Monetary Fund Christine Lagarde seemed to rule herself out of the running on Friday. Other possible candidates include Danish prime minister Helle Throning-Schmidt, who is married to the son of former Labour leader Neil Kinnock.