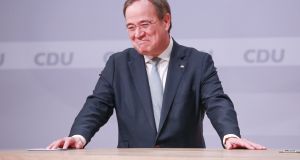 Armin Laschet has a small window of opportunity to establish his authority as CDU leader. Photograph: Christian Marquart/Getty Images

The 59-year-old has just weeks to unite his party, retool its political message for the post-Merkel era and face voters in regional elections in March – followed by September’s federal poll.

On Monday Mr Laschet insisted that he would not adopt the sharp rhetoric of his leadership rival Friedrich Merz, a conservative liberal with a populist streak, but he agreed the CDU needed to tighten up its right-wing, pro-business flank.

“I respect him and all those who voted for him, they all need an offer from the CDU,” he said on Monday.

With a policy platform that is more bullet points – climate, digitalisation, pandemic – than content, Mr Laschet has a small window of opportunity to establish his authority as CDU leader.

He has promised members he will be his own man, but will not push his own personal profile at others’ expense. “I always hear that one must polarise these days,” he told delegates at the weekend. “I say: no, you don’t have to.”

Prioritising the CDU over his loyalty to Dr Merkel will be a delicate balancing act in an effective job share with the chancellor, compounded now by the struggle to juggle public uncertainty and impatience in the pandemic. That proved too much for his predecessor as CDU leader, Annegret Kramp-Karrenbauer, who resigned after just 14 months in the job.

His first test comes on Tuesday when, wearing his other hat as minister president of North Rhine-Westphalia, Mr Laschet joins a video conference with other state leaders on tighter Covid-19 rules.

While Mr Laschet and other state premiers have the lead competence on health matters, Dr Merkel and her administration are responsible for buying and distributing vaccines – a recipe for tension.

Beyond the pandemic Mr Laschet hopes as CDU leader to build on his record in North Rhine Westphalia. He sees himself in the CDU tradition of Rhineland capitalism: business-friendly but open to state interventions to stabilise turbulence and enable structural change.

While he has made only modest promises on climate protection, he insists that coal mining and steel – a diminished but important employer in his home state – are “system relevant”.

“We cannot accept having no steel production in Germany,” Mr Laschet, the son of a coalminer, told a recent gathering of the IG Metall steel union.

Dr Merkel’s steady hand in the pandemic has shored up support for the CDU, which is steady at 37 per cent and nearly five points beyond its 2018 election result. Polling agencies are watching closely to see whether the transition away from the chancellor, who retains considerable personal popularity, costs her party support.

The CDU’s political rivals reacted with studied indifference to the election of Mr Laschet, a perceived continuity candidate.

Leaders of the centre-right Social Democratic Party (SPD), the junior coalition partner in Berlin, were praying quietly the CDU would choose the more divisive Mr Merz, and drive centrist voters into their arms.

With the party struggling in national opinion polls on just 15 per cent, SPD chancellor hopeful Olaf Scholz, the federal finance minister, joked in a tweet on Mr Laschet’s election that “this year will be a challenge for all of us”.