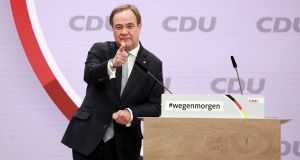 After a closely-watched digital party conference, delegates chose evolution over revolution in Mr Laschet, in a run-off by 521 votes to 466 against his closest rival, the conservative-liberal lawyer Friedrich Merz.

“I want to do everything so that we can hold together through this year . . . and make sure that the next chancellor will be from the [CDU/CSU] union,” said Mr Laschet.

While Mr Merz, a Merkel ally turned rival, promised to revive the party’s conservative profile in a bid to fight off competition from the far right, Mr Laschet promised to retain the centrist profile shaped by Dr Merkel in her 18-year leadership.

His election makes continuity likely in the domestic, fiscal and European policy shaped by Dr Merkel in her four terms as chancellor.

She handed over the party reigns in December 2018 to her chosen successor, Annegret Kramp-Karrenbauer, who announced her resignation after a luckless year in the job.

Saturday’s election, a purely digital affair, was the third attempt to choose a new leader in the last 12 months, after two previous dates were cancelled due to pandemic restrictions.

Mr Laschet attracted just 52.8 per cent support on Saturday, meaning he may struggle – as Mrs Kramp-Karrenbauer did – to win over disappointed Merz supporters in the CDU’s business and conservative camps.

Mr Laschet said after his election that Germans were not interested in who CDU leader was, but how they planned to tackle the pandemic.

On a day-to-day basis, however, the focus in Germany’s pandemic strategy will remain on Dr Merkel, who remains in power until after September’s federal election.

Even before the federal election in just eight months, the new CDU leader faces a busy year of regional elections, the first in March. That packed election calendar adds to the challenge of redefining, and sharpening, the political profile of the CDU without Dr Merkel as a popular vote-winner.

In power since 2005, she still enjoys 51 per cent support while a poll on Friday indicated just 28 per cent of Germans think Mr Laschet has what it takes to be chancellor.

Aware of Mr Laschet’s weak personal popularity, CDU officials moved in recent weeks to separate the leadership race from the decision to choose its chancellor candidate.

Now Mr Laschet has to negotiate with the CDU’s front bench whether he – or someone else – should run as the centre-right hopeful in September’s poll.

At least two others have their eye on the chancellery: the CDU federal health minister Jens Spahn; and head of the CDU’s Bavarian sister party, the Christian Social Union (CSU), Markus Söder.

The Bavarian leader wasted no time in congratulating the new CDU leader and promising: “I’m sure we will find a clever, united answer to all outstanding questions.”

Though less known to German voters than Dr Merkel, Mr Laschet is a party heavyweight and head of both Germany’s most populous state – home to 18 million people – and the party’s most powerful regional CDU branch.

The 59-year-old was born in Aachen and was first elected to the Bundestag in 1994. A lawyer by training, he spent periods working as a journalist, editor and political adviser before entering politics full-time.

He served six years in the European Parliament until 2005 before joining the state government of North Rhine-Westphalia. Since 2017 he has served as minister president there in a CDU coalition with the liberal Free Democratic Party (FDP).

He is a practising Catholic, has an active network in Catholic and Protestant circles and has insisted the CDU’s touchstone is not conservative politics but its Christian values and world view.

Saturday’s defeat for Mr Merz, in his second attempt to lead the CDU in two years, marks the likely end of his attempt at a political comeback.

He was a rising star in the party until 2002 when Angela Merkel, recognising his rhetorical talent and ambition, ousted him as parliamentary floor leader. After a lucrative period as a business consultant he narrowly lost the 2018 leadership race.

After his second defeat on Saturday, Mr Merz announced via Twitter his readiness to join the Merkel cabinet, as economics minister. Via her spokesman, the chancellor told her old rival there was no vacancy.