Around 300 people are thought to have survived after a wooden boat, carrying around 600, capsized off the coast of Libya. Video: Médécins Sans Frontières 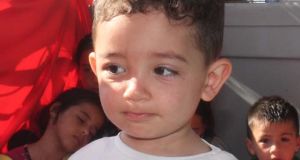 Irish Defence Forces photograph of a children on board the the LÉ Niamh enroute to Palermo. 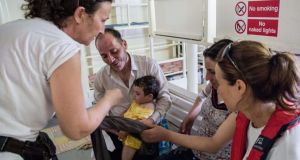 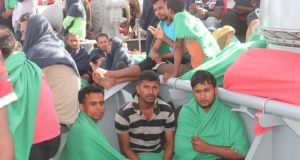 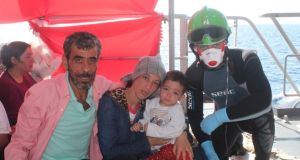 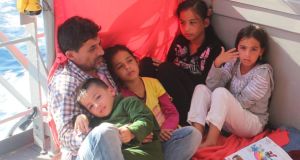 The Naval Service patrol ship LÉ Niamh arrived in the Sicilian port of Palermo on Thursday carrying 367 survivors and 25 bodies recovered from a fishing vessel which capsized in the Mediterranean.

The LÉ Niamh docked as rescue ships were called to the aid of more migrant boats in the same area of the Mediterranean.

Orlando, speaking on Italian television as hearses arrived to take the bodies away, called on European leaders to do more to prevent such disasters and to allow more refugees to re-settle in their countries.

After the survivors disembarked, some were escorted back on board to see if they could identify the dead children.

Police said they had detained five men suspected of having piloted the boat that overturned on Wednesday and of having had a role in trafficking the migrants.

About 200 people who were travelling on the fishing boat, understood to have had as many as 700 migrants on board, remain unaccounted for and feared dead.

Some 342 men, 12 women and 13 children who survived after the boat capsized were on board the Irish naval ship when it arrived in Sicily at about 4pm.

The incident occurred when two rigid inflatable boats (ribs) from the LÉ Niamh were approaching the vessel some 100km northwest of the Libyan capital, Tripoli on Wednesday.

United Nations High Commissioner for Refugees spokesman Federico Fossi said as many as 100 people might have been trapped below the fishing boat’s main deck when it capsized.

The Italian navy, which had two ships in the rescue operation, said three survivors were flown by helicopter for medical treatment. One was a man with a fractured leg; the other was a mother, with one-year-old son, who needed dialysis.

The search for survivors continued throughout the night, with about five vessels patrolling the area of the disaster for signs of life, but none were found, according to non-profit group Migrant Report, which is closely following the situation.

Most of the passengers were believed to be from Syria, though their nationalities have not yet been confirmed.

Minister for Defence Simon Coveney said the fishing craft was neither stable nor capable of carrying the kind of numbers it had on board.

“This is the complexity of what our Naval Service is involved in now,” he said.

More than 2,000 people have died this year while attempting to make the journey, according to the International Organisation for Migration.

Worsening conflicts in Syria, northern Africa and the Middle East have driven an increase in the number of migrants trying to reach Europe by crossing the Mediterranean since the start of the year.

The Government offered assistance to the Italian government in handling the migrant crisis after more than 850 people died in one incident in April off the Libyan coast.

The LÉ Niamh had been tasked to assist the craft at 8am Irish time on Wednesday and arrived on scene at 11.45am.

Naval Service spokesman Capt Dave Barry said the two Ribs were approaching each side of the vessel and signalling people to remain seated until lifejackets could be distributed.

“Whatever happened, a number rushed to one side, and it capsized and sank in a couple of minutes,” he said.

The patrol ship launched its four liferafts, while the Rib crews distributed lifejackets to the hundreds of people in the water.

A spokesman for the Naval Service said that in addition to logistical and administrative tasks over the coming hours and days, the LÉ Niamh would pass all available information on the incident to the Italian athorities.

Six members of the LÉ Niamh’s crew received training in counsel assistance before their deployment.