LÉ Eithne to be dispatched in migrant search on May 8th 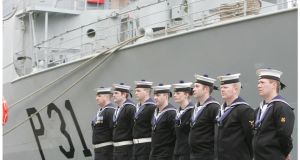 Naval Service flagship LÉ Eithne is to be despatched to the Mediterranean Sea to assist in an international aid operation to prevent migrants and refugees drowning as they try to reach Europe. Photograph: Alan Betson/The Irish Times

The Irish naval vessel LÉ Eithne is to be dispatched to the Mediterranean sea to participate in an EU search and rescue mission for migrants fleeing north Africa, the Minister for Defence has said.

Simon Coveney told RTÉ radio on Tuesday morning the navy was preparing the LÉ Eithne so it would be ready to leave for the Mediterranean by Friday, May 8th.

He said the vessel was being prepared in Haulbowline naval base in Cork harbour so that it could “successfully save people and drop them to local ports in the vicinity of the Mediterranean”.

“It is totally unacceptable to allow hundreds and hundreds of people to drown,” said Mr Coveney.

“We are talking to the two key countries in the Mediterranean who are affected by this and trying to respond to it - Italy and Malta - with a view to putting a memorandum of understanding between us to make sure when we do send a ship down we know exactly what we’re doing.”

“Most importantly if we pick people up that we have ports that we can drop them into quickly and efficiently so that we can treat people with the respect that they deserve.”

The LÉ Eithne was chosen for the mission due to her large deck space where it would be possible assemble large crowds of people, said Mr Coveney.

Mr Coveney said the Taoiseach was anxious to respond the crisis in southern Europe by providing “ humanitarian and emergency rescue response capacity”.

Asked whether there was any plan in place to bring migrants back to the Republic of Ireland, Mr Coveney said it wouldn’t be practical to be picking people up from the sea and bringing them back to the State.

“I know the Department of Foreign Affairs and the Department of Justice, who are very active on this issue, are looking at how and if Ireland can agree to increase the number of refugees we can take here as part of the European effort to share the load with Italy, Malta and other Mediterranean countries.”

Mr Coveney said he did not expect the LÉ Eithne’s absence from Irish waters would affect fisheries patrolling, with a brand new patrol vessel expected to arrive in the State in the coming weeks.

The European Union has been struggling to forge a united response to the migration crisis currently sweeping across the Middle East and north Africa as desperate migrants flee their homes for refuge in Europe.

Nearly 6,800 migrants were rescued from the Mediterranean sea over the May bank holiday weekend, with more than 3,600 migrants rescued on Saturday alone.

More than 1,750 people are believed to have drowned in the Mediterranean this year, compared to more than 3,300 deaths during the whole of 2014.

EU leaders have agreed in principle on a pilot resettlement programme for migrants which would involve moving people from refugee camps outside EU territory to countries within the European Union.

UK prime minister David Cameron has ruled out Britain’s participation in the resettlement programme but will contribute three ships and three helicopters to the rescue mission in the Mediterranean.