Russia has warned Montenegro about push for Nato membership 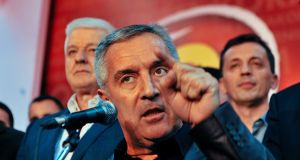 Prosecutors in Montenegro say an alleged plot to seize power and kill prime minister Milo Djukanovic was led by Russian and Serbian nationalists, some of whom may have links to Moscow-backed separatists in eastern Ukraine.

The Kremlin “categorically” denied any involvement on Monday, but Russia has warned tiny Montenegro its push for Nato membership is seen as an unfriendly act that will damage relations and destabilise the Balkans.

During a parliamentary election on October 16th, officials in Montenegro announced 20 Serbs had been arrested the previous day while trying to cross the border from Serbia, as part of a plan to attack and seize parliament. Serbian prime minister Aleksandar Vucic revealed a few days later that his country’s security services had detained several suspects and gathered “irrefutable evidence that some people . . . monitored the movement of [Djukanovic] on a daily basis, every second, and were telling other people who were supposed to act on it.”

Montenegro’s special prosecutor, Milivoje Katnic, announced on Sunday that a “powerful organisation” of about 50 people from Russia, Serbia and Montenegro intended to carry out the coup and kill Mr Djukanovic.

“The organisers of this criminal group were nationalists from Russia who [were certain that] the government of Montenegro led my Milo Djukanovic could not be changed in an election and should be toppled by force,” he said.

“The aim was to stop Montenegro on its Euro-Atlantic path and in particular joining Nato.”

Polls suggest Montenegro is split over Nato membership, with people who want closer ties with traditional allies Serbia and Russia being its staunchest critics.