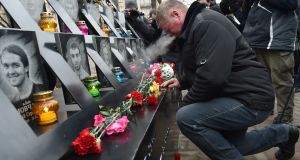 A relative cries at the memorial for those killed during the so-called Euromaidan revolution, at a ceremony in Kiev on Monday to mark its third anniversary. Photograph: Sergei Supinsky/AFP/Getty Images

Thousands of Ukrainians gathered in their capital Kiev on Monday to mark three years since the start of the so-called Euromaidan revolution, despite warnings of potential violence by government opponents.

Police and national guard units closed roads in central Kiev from the early hours, a court building was evacuated due to a bomb threat and explosives experts destroyed a suspicious device close to the Maidan square.

It was here on November 21st, 2013, that demonstrators first protested against the unexpected decision of Ukraine’s then president, Viktor Yanukovich, to scrap a historic trade and political pact with the EU in favour of closer ties with Russia.

That small rally, at which people waved Ukrainian and EU flags, grew into an almost nationwide movement after riot police brutally beat protesters on Maidan nine days later. The square became a vast camp, where people stayed until police shot dead scores of protesters in February 2014, and Mr Yanukovich fled to Russia.

“This is where Ukraine stood up and said no to Yanukovich and his gang – and to Russia,” said Yevhen, a student taking photographs with friends on Maidan on Monday.

“I wasn’t here at the start [of Euromaidan] but I came when I could. Everyone did something to help the protests, whether bringing food, standing guard, making leaflets or playing music. Ukraine came together here – but it’s hard to stay together. We still have lots of problems.”

The anniversary finds Ukrainians frustrated with the failure of their pro-western leaders to fulfil the main demands of Euromaidan – crush corruption, cut the influence of rich business “oligarchs”, improve the economy and spread wealth more evenly among the country’s 45 million people.

The government and president Petro Poroshenko face criticism from many sides, including the pro-Russian Opposition Bloc party formed by old allies of Mr Yanukovich, liberal civic society and ultra-nationalist groups. The far-right Azov battalion said it expected thousands to attend a march on Monday evening.

On the eve of the anniversary, Mr Poroshenko claimed Russia planned to use political protests to destabilise Ukraine, while continuing to back separatists in a conflict in eastern regions that has killed some 10,000 people since April 2014.

“The Kremlin’s aim is constant domestic destabilisation, anarchy... early elections in Ukraine and the strengthening of the pro-Russian forces’ position in the new parliament,” he said.

“If we take the path of sharp domestic conflicts, the country could quickly be thrown into the abyss of chaos and disorder, and be left defenceless before external aggression. As president, I will not let that happen.”

Mr Poroshenko admitted, however, that people “have grounds for dissatisfaction... and the inalienable right to protest”.

“It is exactly this democracy and freedom that are clear achievements” of Euromaidan, he said.

About 6,000 security service personnel have been mobilised to monitor the anniversary events.

Vaysl Hrytsak, head of Ukraine’s security service, said “many officers spent last night at work and will continue to do so to ensure order and security on our streets”.